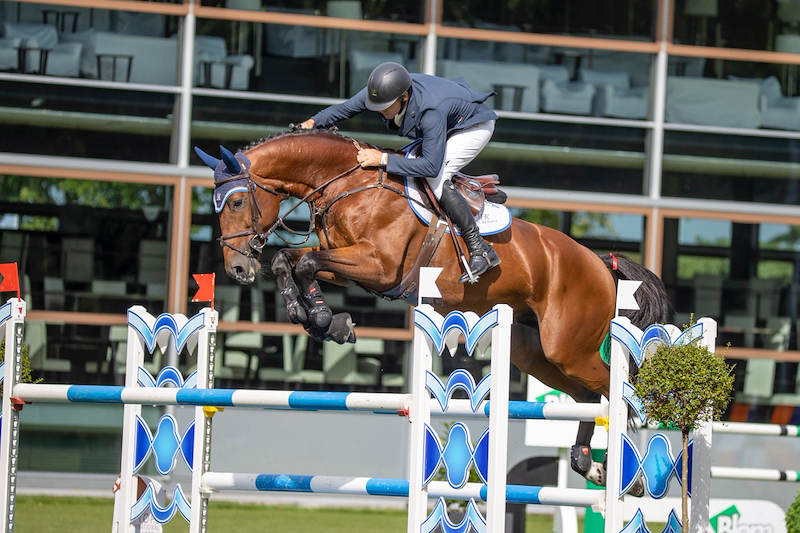 115 six-year-olds jumper horses made their appearance at Valkenswaard today. Nearly half obtained a 0-penalty result in this first round of the Blom Cup.

For the first time, all horses that reach the finish in the first manche of the Blom Cup, advance to the second round that is scheduled for 08.30hrs tomorrow. Today, they were served a fair course at 1.30m level at the beautiful main ring of Tops International Arena.

In the first round of the semi-final for six-year-old jumper horses in the KWPN Championships Blom Cup, 56 combinations remained clear. Among them were the KWPN-approved stallions Lambada Shake AG (Aganix du Seigneur out of Grappa AG by Spartacus, breeder Alex Gisbertz) and Lambrusco (Entertainer out of Total Touch stb-ext pref prest by Lux, breeder Pieter Keunen), both ridden by Pieter Keunen, former stallion show champion Liverpool (Tangelo van de Zuuthoeve out of Dauphine keur IBOP-spr pref prest by Lux, bred by Bart Derksen of Steenderen) presented by Robert Puck and Lay Out (Verdi out of Vallei Roos elite prest PROK by Tangelo van de Zuuthoeve, bred by J.J. Ilbrink and J.H. Ilbrink-Lueks of Geesteren) with Kristian Houwen. The KWPN-approved stallions Levi VDL (Arezzo VDL out of Erusa ster EPTM-spr D-OC by Diamant de Semilly, bred by E. Reyrink of Diessen) ridden by Marcel de Boer, La Costa ES (Mosito van het Hellehof out of Isolde ES elite sport-spr pref PROK by Cumano, bred by and registered to Egbert Schep) with Gerd-Jan Horsmans and Lord of Farming HS (Balou du Rouet out of Doutzen stb by Clinton, bred by Gebr. Bosch of Luttenberg) with Caroline Müller finished the course without incurring any penalties. Worth mentioning are the breeders Stal Hendrix (3), VDL Stud (4) and Jean Dresen (3) that all witnessed multiple homebred horses produce a clear round today.