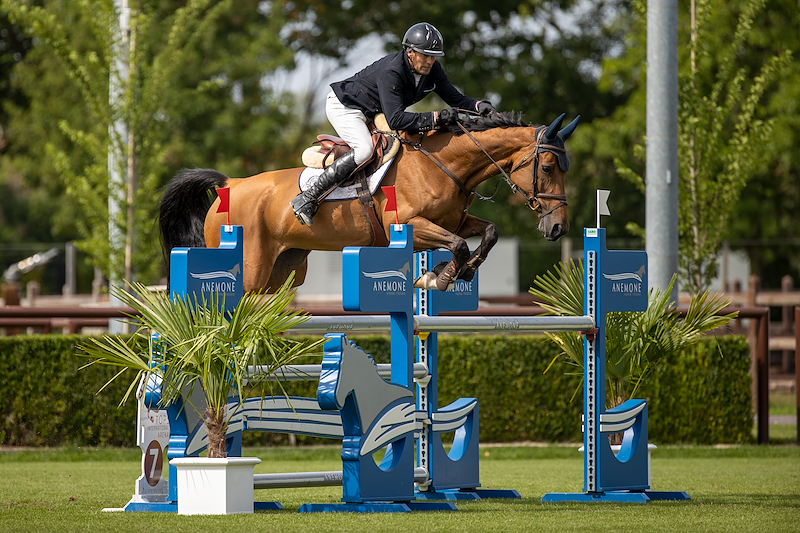 The second round of the semi-final for 5-year-olds has come to an end, 26 combinations cleared today’s course in the main arena. As the results are in for both rounds now, the list of the 40 finalists could also be drawn up.

The 40 best combinations, computed over two days, have qualified for tomorrow’s final, the other contestants may come back for the small final in the second ring. 61 combinations cleared yesterday’s 1.20m course on sand footing and today the audience saw 26 pairs produce a faultless round at the grass arena. 18 combinations have placed for the finals with zero penalties, and they are joined by 22 duos that incurred a total of four penalties. In the final, everyone starts with a clean slate.

The starting list for the final features five KWPN-approved stallions. Repeating yesterday’s feat, Mindset ES (Aganix du Seigneur out of Hosanne ES keur sport-spr pref by Kannan, bred by and registered to Egbert Schep) with Jarno van Erp produced another clear. Mees van de Watermolen (Vannan out of Holinda ster by Carambole, bred by J. Greve of Haaksbergen) ridden by Renske Kroeze also advances to the final, just like Maximus VDL (Zirocco Blue VDL out of Daloma elite IBOP-spr sport-spr PROK by Verdi, bred by and registered to Henk Grol of Muntendam) with Cristel Kalf, Stargos VDL (Stakkato Gold out of Estella by Conthargos, breeder W. Winkeler) and Horizontal (Casall out of Mel d’Argences by Quick Star, bred by and registered to Jan Tops ofValkenswaard). Today’s best result was obtained by Johan Bergs aboard Jos Althuyzen’s keur EPTM mare Mariekske A (Edinburgh out of On Wings keur prest by Peter Pan).