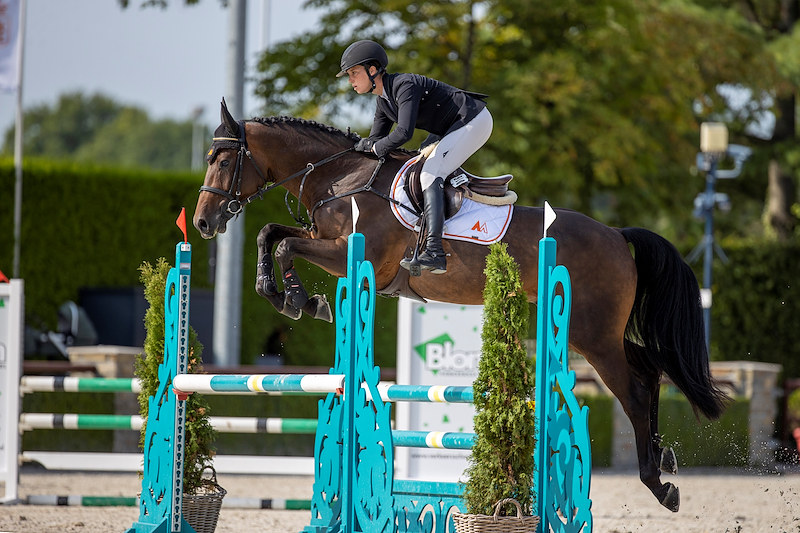 Tal Milstein and Marcel Beukers assessed over 60 four-year-old jumper horses in the semi-final of the Blom Cup today. Ridden by Renee de Weert, it was Nelson (s.Highway M TN) that emerged as the winner.

The highest marks in this semi-final were awarded to the KWPN-approved stallion Neymar VDL (Thunder van de Zuuthoeve out of Darco’s Ros by Darco) of breeder VDL Stud, that had already triumphed earlier this month in the young horse competition of Tolbert. Presented by Suzanne Tepper, the stallion received an 8.7 for both jumping and rideability, but an unfortunate error knocked him down to the seventh position. “This horse jumped with a lot of scope and is easy to ride. He is a bit bold, but that’s no surprise given his pedigree. It might serve him well in the future”, commented Tal Milstein.

Scoring an 8.5 and an 8.6, Nelson (Highway M TN out of Fanory elite EPTM-spr pref PROK byCardento, bred by family Kuipers of Hengelo) and Renee de Weert could come forward as the winners. The stable rider of Henk van den Broek only took over the reins one week ago, after successfully presenting the horse of Klaas Mostert in the VSN Final earlier this year. “This is such a fantastic horse. Every jump is the same, he shows a good balance, lots of power in the canter and jumps with ample scope. He convinced us in every aspect!” The runner-up is another well-rounded showjumper: Notate JDV (Jacadello out of Hantate stb-ext PROK by Lamm de Fetan, bred by Jean Dresen of Valkensburg). Ridden by Stephanie Withworth this talent of Stal Hendrix jumped to two 8.5s. “This is a mare with lots of quality. In terms of balance, she is slightly more on the forehand, but she surprised us in the takeoff as she easily shortens her last stride to generate ample thrust, plus she is sharp, rideable and shows good instinct.” The Catch-daughter Lourdes placed third with Sanna Bergs-Olsson as they received an 8.2 and an 8.5. The mare of Marco Zeekaf drew attention through her light-footedness, rideability and athletic ability.

The 25 best horses have qualified for the final, that starts at 08.30hrs tomorrow.