Nina Quite wins Blom Cup with a 9.5 for jumping 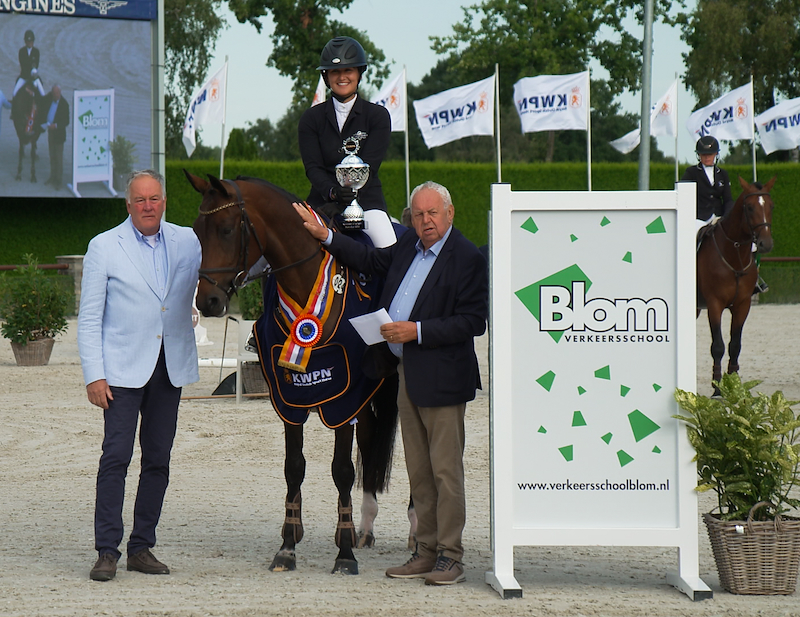 This morning, the Blom Cup Finals have kicked off with the four-year-old class. Megan Laseur piloted the Andiamo de Semilly-daughter Nina Quite to the title.

The jury, composed of Marc van Dijck and Bart Henstra, was tasked with assigning each of the 25 finalists two marks, one for rideability and one for jumping. Additionally, they provided explanatory comments. Several horses were awarded a 9 and the entire top three was filled with mares.

Three mares on the podium

Scoring a 9.5 for jumping and an 8.2 for rideability, Nina Quite (Andiamo Semilly out ofCecampione elite IBOP-spr sport-spr PROK by Quite Capitol) was a well-deserved winner. She was ridden by Megan Laseur and is bred by Cor and Margriet Kuin of Lepelstraat. “This mare possesses a great canter, very quick reflexes, and a superb technique. A very talented jumper horse that meets all the requirements”, said Bart Henstra. The top layer of the class was of incredible quality. Runner-up Lourdes elite EPTM-spr D-OC (Catch out of Escada van Cachas) of Marco Zeekaf, ridden by Sanne Bergs-Olsson was another prime example. This mare had previously been one of the highlights of the mare test, which she passed with 80 points. “This mare shows great rideability and a scopey canter with a powerful push. She jumps with a good technique and lots of athletic ability.” Lourdes was awarded two 9s. Receiving a 9 and an 8.9, it was also a good day for Stephanie Whitworth and Stal Hendrix’s keur mare Notate JDV (Jacadello out of Hantate stb-ext PROK by Lamm de Fetan, bred by Jean Dresen ofValkensburg). Yesterday, the pair placed second in the semi-final, today they took the third step of the podium in the final. “This mare has so much scope and even though she is slightly horizontal in her balance, she always jumps with a great technique. Certainly, a horse for the future!”, commented Marc van Dijck.