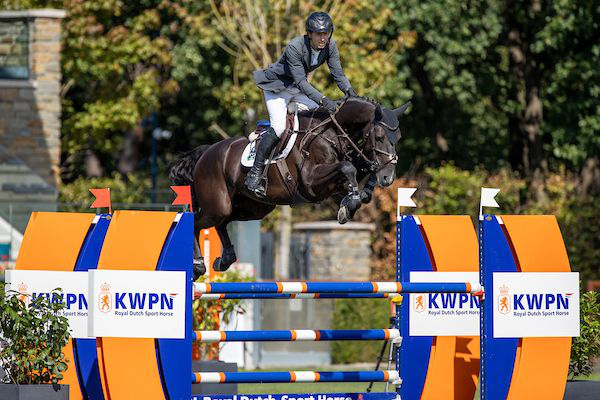 During the Blom Cup final for six-year-olds the audience was treated to beautiful sport. Alex Gill produced the fastest clear round aboard VDL Lightfeet, bred by Geert van der Meer.

Nine combinations advanced to the jump-off, for which Louis Konickx had designed a demanding course. The twelve best horses have earned an invitation to the WC of Lanaken, the exception being the KWPN-approved stallion Lambada Shake AG (Aganix du Seigneur out Grappa AG bySpartacus, breeder Alex Gisbertz), that is registered abroad. Ridden by Pieter Keunen, the stallion jumped three clear rounds to rank 5th in the overall standings.

The best result was obtained by Alex Gill and the Arezzo VDL-offspring VDL Lightfeet (out of Horsinaa keur sport-spr by Indoctro, bred by Geert van der Meer) of VDL Stud, that was produced by Nella Bijlsma. “It's great when a plan comes together! That’s not always the case so we are very pleased. VDL Lightfeet has abundant quality, and it is thanks to the great schooling of Nella we already get to celebrate such a victory”, responds the rider of VDL Stud. Runner-up was the scopey Quickly de Kreisker-daughter Liverma (out of Verma W by Kojak). Johan Klein Zieverink campaigns this horse for her breeder, Jos van Deurzen of Stal Keizersberg. They were the second entry in the jump-off and immediately put their rivals under pressure through a fast, clear ride. Alex Gill and VDL Lightfeet were the only ones to best them. The third step on the podium was claimed by the Etoulon VDL-son Legend D (out of Eurostar PROK by Eurocommerce Dubai, breeder H.J.M. van Dartel of Wijhe), that garnered attention with his technique and bascule. Lennard de Boer steered the bay to a double clear in this serious 1.35m course.

Watch the first reaction of Alex Gill below