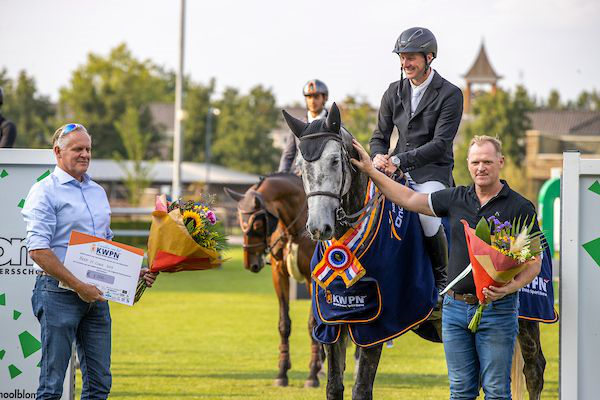 Last year he came very close, but this year he sealed the deal. Ridden by Michael Greeve, the Zirocco Blue VDL-son Keep it Cool SSS seized the win in the Blom Cup for seven-year-old horses.

The 1.45m course designed for the seven-year-old horses in the main ring of Tops International Arena was a serious warming-up for the World Championship in Lanaken. Well, for the nine best horses to be exact, as their accomplishment was rewarded with a ticket to the prestigious event.

Only three combinations crossed the finish line without incurring any penalties. Both the technical lines and the limited time allowed played a key role. Three combinations cleared the course but saw one time penalty pop up on the scoreboard and although that barred them from entering the jump-off, it ensured qualification for the WC. In the jump-off, the final battle was one between winner Keep it Cool SSS (Zirocco Blue VDL out of Wyoming-S elite EPTM-spr sport-spr PROK by Corland, breeder Eddy Schoonhoven of Schoonrewoerd) of Gert-Jan van de Pol of Nieuw-Heeten, Bas Moerings aboard homebred Kivinia (I’m Special de Muze out of Favinia ster sport-spr PROK by Calido I) and Kapitaal L (Cornet Obolensky out of Fenomenaal by Comme d’Api vd Hacienda Z, bred by and registered to Johan Laseur) ridden by Megan Laseur. Breeder Eddy Schoonhoven was present in Valkenswaard to witness Keep it Cool SSS win the title and accordingly, receive a breeders premium. “Fantastic! I have sold him as a foal at Foal Auction Dronten and always kept a close eye on his progress; recently they also performed well in Knokke. We have not been very lucky with his late dam in breeding, but she has produced some very good offspring and Keep it Cool SSS takes the biscuit.”