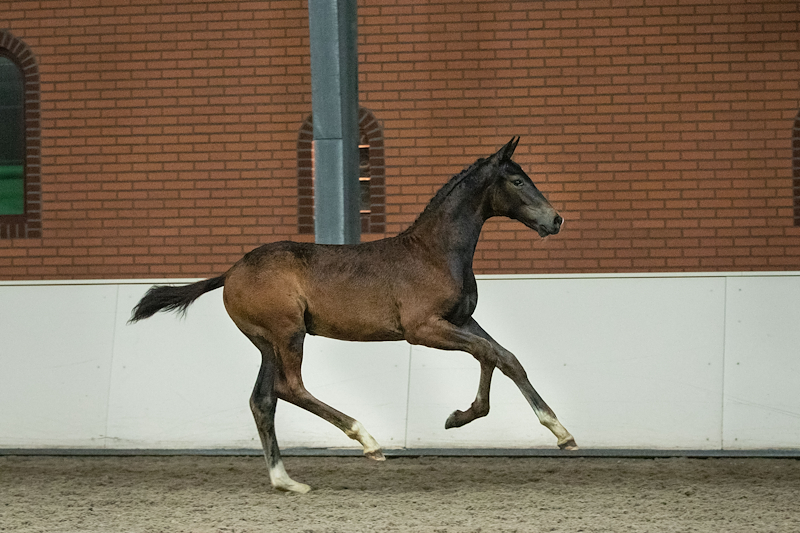 The collection of this season’s fourth KWPN Online Foal Auction has been launched. The collection that is composed of ten jumper and eight dressage foals includes offspring of Douglas, Zirocco Blue VDL, Chaqui Z, Aktion, Kjento and For Ferrero. Bids can be placed from September 9th till the 12th.

The last few editions of the KWPN Online Foal Auction were characterised by high sales percentages and an international buyers network. During the most recent auction, foals were sold to the United States, France, Ireland, Spain, aand Mexico.

Last week, the Sinaa-line grabbed the spotlight once again thanks to the Blom Cup victory of VDL Lightfeet (s.Arezzo VDL). Originating from that same lineage are the Douglas-filly Shaysinaa, that is bred out of the full sister of 1.60m horse Bugatti (s.Modesto) of Juan Andres Rodigruez and half-sister of 1.55m horse Celebrity VDL (s.Indoctro) of Ernesto Canseco, as well as the Douglas-colt Spirit of Hirasinaa, that is bred out of a full sister of the Grand Prix jumper Tirasinaa of Patricia Koller. Top progenitor Douglas also sires the colt Sodinius, whose dam is a full sister of the 1.50m showjumper and KWPN-approved stallion Fire (s.Vleut). The Kallmar VDL filly Salmade Ryal K comes out of a half-sister of the 1.50m KWPN-approved stallion Flying Dream (s.Zapatero VDL) while her granddam already produced the 1.50m jumper Denychin Ryal K (s.Chin Chin). Sariena T (s.Landino VDL) is bred out of a half-sister of the 1.60m Grand Prix horse Luxina (s.Lux). In conclusion, this collection of jumper foals is replete with performance genes.

Sion offers the chance to acquire a direct son of the keur stallion Aktion who performed at Grand Prix level with Gyula Dallos. His dam was active at Z2-level and is a half-sister of the Small Tour horse Bueno (s.Florencio). Sander (s.Livius) originates from a small yet successful performance family, whose dam is a half-sister of the Small Tour horses Dhagoberg (s.Spielberg) and Ferdinand (s.Vivaldi) and out of the same lineage we find the filly Sanne (s.For Ferrero) whose granddam competed in ZZ-Zwaar, passed her ability test with flying colours and already produced the international Small Tour horse Helga (s.Chagall D&R). The Kjento-colt Senior is bred out of a half-sister of the international Grand Prix stallion Westpoint (s.Jazz) that was crowned world champion at six years of age.

The entire collection can be found at www.kwpn.auction. Friday the 9th of September the auction opens. To place a bid on the foals of this collection one must first be registered as a bidder. Monday September 12th the auction closes from 20.00hrs onwards. If you are looking for more information about the foals, a KWPN Inspector is happy to help. Additionally, our sponsor Horses2Fly can assist you in any international transport. If you have any questions, please contact Mairin van der Tol via salespromotion@kwpn.nl , 0341-255511.