WC Ermelo: My Precious and Mauro Turfhorst advance to the final 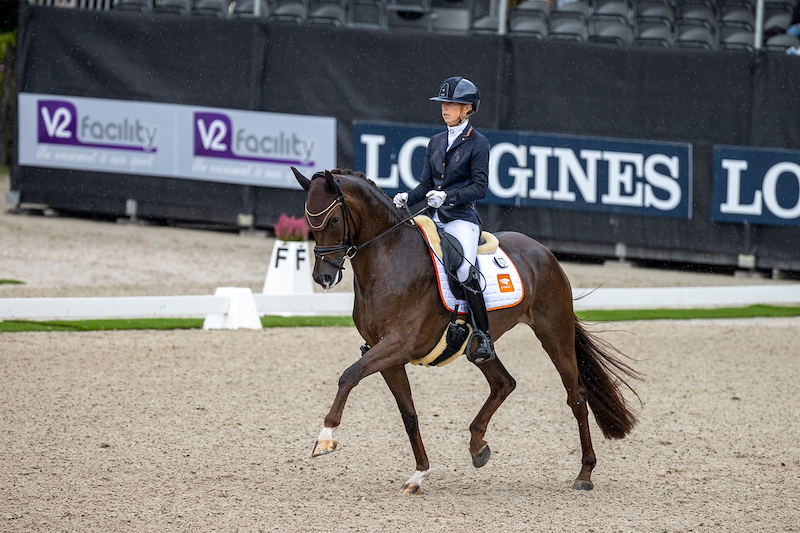 The KWPN horses Mauro Turfhorst and My Precious have secured a spot in the final for five-year-old horses on Saturday.

Monique Peutz-Vegter was one of the four judges today: “We have seen some very good horses today. Kirsten ranked in the top-ten with her My Precious, but it could have been a higher placement. She started off very strong in the trot and walk, they were a display of pure harmony. In the canter, My Precious got a bit tense, and it caused a minor mistake that has cost them some valuable points. All in all, a very solid result!” My Precious is a daughter of Ferguson and comes out of elite mare Cindarella Platinum (s.Vivaldi). This dam line has produced the Grand Prix dressage horse Diederik (s.Vivaldi) and the international dressage horse Imperial (s.Charmeur). My Precious is bred by Titan Wilaras and is registered to her rider. The German rider Frederic Wandres could come forward as the winner aboard his Fashion Prinz (s.Fürst Romancier).

It may not be a top-twelve ranking, but even the ones that have not qualified for the final are among the world’s best dressage horses. Mission (Eye Catcher out of Black Beauty L elite s.UB40, bred by Titan Wilaras) deserves that label without a doubt. Femke de Laat presented the chestnut stallion in her typical sympathetic manner. His excellent trot was awarded a 9 and contributed to a total score of 8.08.

The by Adri van Erp bred Montrachet (Glock’s Toto Jr. out of Bormiek elite preferent s.Tuschinski) received an 8.0 for both his walk and trot. Saskia van Es took the 23rd position. Maddox Mart (Hennessy out of Fanirma elite s.Bordeaux, bred by Lia van Baalen of Gellicum) was awarded a 7.72 average.

Willingapark Miana (Franklin out of Hiana elite s.Bordeaux, bred by family Naber) was awarded an 8.0 for her light-footed trot. She was ridden by Jayden Brown who represents Australia. Martien-Tetti (Gunner KS out of Gabiëlla-Tetti elite s.Johnson) was bred out of a renowned dam line by J. Gerrits-van Kessel. His rider from Ukraine, Varvara Sorokina is yet to gain more expierence, but what a lovely horse. Mayweather JS (Ferdeaux out of Udice elite s.Jazz), that was bred by Mrs. Schouten, showed some lovely parts throughout the test.