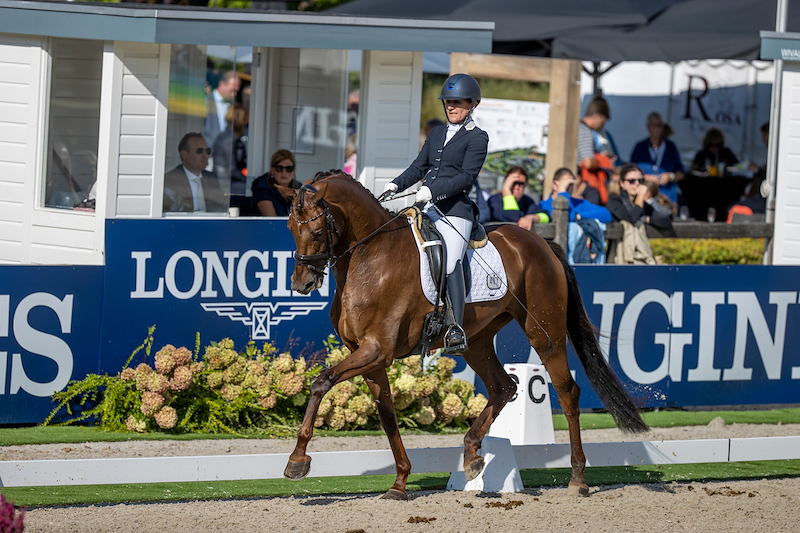 After the WC-qualification for five-year-old dressage horses, it was time for the four-year-old horses. This additional class is presented by Sport Pro Horses. Judith Ribbels and Nanny Mc Phee formed the best Dutch combination.

Judith is not only the rider, but also the breeder and owner of this Vitalis-daughter that comes out of the international Grand Prix and elite mare FunFun EB. A 9.0 for the incredible canter contributed to a total of 87.6. Her light-footedness and elasticity were clear pluses of this mare. Bart Veeze’s Nero ranked third with an overall score of 87.4. Titan Wilaras bred this son of Ferguson out of the ster mare Git Odette W (s.Totilas).

Aniek de Laat claimed the fifth rank aboard her elite mare Namorka, scoring 83.8. She is a daughter of Vitalis out of the elite preferente prestatie mare Rita Morka, who she could buy from Huub and Tiny van Helvoirt. By now, she has bred multiple approved stallions and Grand Prix horse out of this lineage. Bart Veeze also claimed the sixth position, this time in the saddle of Nirvana (s.Indigro). He is bred by Titan Wilaras out of the preferent elite mare Daily Enjoy (s.De Niro). The great-granddam Fresia keur preferent prestatie (s.G.Ramiro Z) foaled the Grand Prix dressage horse Daisy van Wittenstein P (s.Johnson) and the 1.60m showjumper Quality II (s.Quasimodo) and the CCI3* eventer horse Harvey van Wittenstein (s.Warrant). Sport is deeply embedded in this lineage.

Hexagon’s Trademark received an 8.0 for the trot and the canter and even an 8.8 for the walk. His power and impulsion are two of his strong suits. The son of Trafalgar was born out of Grace Kelly (s.Spielberg) and was bred by T.S. van Tongeren. The KWPN-approved Nick Wimphof showed appealing offspring during last week’s offspring inspection. Ridden by Wendy Kuiken, Nick Wimphof (Just Wimphof out of Hiana elite s.Bordeaux, bred by Gebr. Naber) showcased his expression and power. The mark for submission would have been higher if not for some tension.

Femke de Laat piloted Nox (s.Fuerst Romancier out of Blue Bell elite s.Krack C, bred by A. Schepens) to the ninth place. The alluring chestnut stallion has a lovely presence. Night Star (In Style out of Zuskarla elite sport-dr s.Scandic, bred by J. van Eijkelenburg) was professionally presented by the youngest rider on the entry list, Micky Schelstraete. The pair scored an 8 or higher on every aspect.

The entry list listed 26 four-year-old horses. It offered the perfect opportunity for young horses to gain some experience at a different terrain and get used to a vibrant atmosphere. The exercises asked were simple but provided the jury with ample information about the quality of the horses. As it turned out, there was plenty of quality as displayed by New Diamond (Daily Diamond out of Ginger O s.Apache, bred by A. Onnes) that was ridden by the Belgian rider Aure Spleeters. Or Newton’s Law (In Style out of Dayaan voorl. Keur s.Johnson, bred by family van de Veen) that was ridden by Ingrid Gerritsen. The latter also made her appearance aboard Neverwinter G, studbook name Navado (Expression out of Unifee ster prest s.Houston, breeder H. Germs).

Noël of Utopia (Indian Rock out of Parola Utopia elite prest s.Jazz, bred by Bemi Hoeve) was ridden by Leonie Bos. Wendy Kuiken also presented Novian (Apache out of Happy Feet s.Dancing Hit, bred by T. Tolner). One of the most remarkable pedigrees we have seen at play today, was the impressive Nico (bred by G.M.M. Joosten). He is a son of Wilson out of the Cizandro-mare Gea. Ridden by Greece’s Fotini Nefeli Georgitsou he showcased ample talent.