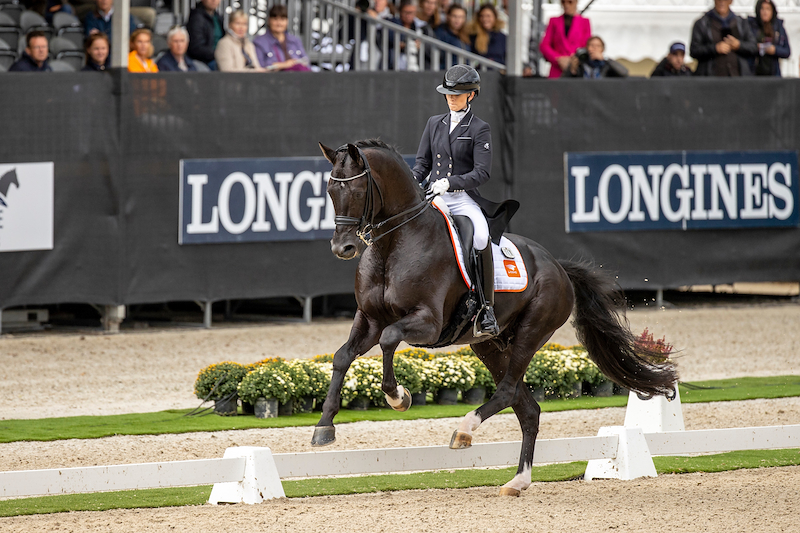 In the qualification for the seven-year-old horses, last year’s world champion Kjento once again let the judges’ hearts skip a beat. His 84,415% score bumped him to the top of the list.

The expectations were high, as the Negro-son Kjento is the reigning world champion of his birth year. The audience got what they came for. The powerful stallion was presented in an excellent manner by rider Charlotte Fry. Power, beautiful half-passes, and a dazzling canter made the test a fantastic performance. The technical score of 76%, three 9.5s and a 9.8 for the canter produced a total of 84.415%. The KWPN stallion (Negro out of Zoriana elite pref prest IBOP-dres PROK by Jazz, breeder Ad van Os of Sprang-Capelle) secured the win, but his biggest rival Rheinlander stallion Escamillo followed in hot pursuit. Manuel Dominguez Bernal piloted him to 82.965%, ahead of Beatrice Hoffrogge and the expressive Destello at 80.015%.

Marieke van der Putten placed fifth and therefore secured a spot in the final aboard Kuvasz RS (Glamourdale out of Dyor de Hus elite pref IBOP-dres PROK by De Niro, breeder RS2 Dressage Center De Horst) takes after his sire. The stallion was very focused on his task and earned an 8.9 for the trot and 8.5 for perspective toward a 78.131% total. Sweden’s Sofie Lexner also advances to the final with the Franklin-daugther Kavira (out of Davira stb-ext by Sorento, breeder P.P.W. Jansen of Overloon). This mare was previously sold for 39.000 euros at the Sell Foal Auction. Now, she showed way. A 9 for the trot and 8s for the canter and perspective brought her total to 76.259% and therefore an eighth position.

Kyton misses out on final

Bart Veeze and Kyton (Ferguson out of Wilbria keur IBOP-dres pref s.Ferro, breeder W.J.J. Goesten) have repeatedly proved their skills in the ring already. The Dutch champions performed another strong test today, with a particular effortless trot and powerful canter. an 8 for trot, 7.8 for the walk and 8.5 for the canter totalled 74.533%. The fourteenth position and that means they may come back in the small final.

Thalia Rockx guided the homebred Koko Jr. de la Fazenda to the fifteenth position. The daughter of Toto Jr. and the Big Tour horse Gerda Nova elite sport-dres by Romanov, moved light-footedly through the arena. The beautiful trot received an 8.8 and the jury also awarded 8s to the walk and perspective. They were granted a technical score of 69.553%, making the average 74.377%. The German/Chilean rider Svenja Grimm skillfully presented last year’s Pavo Cup-winner Kadiene (Zhivago out of Glamour Girl ster PROK by Belissimo M, breeder Venderbosch Stud). The sympathetic duo placed nineteenth with a score of 72.86%.

Tomorrow, all horses that have not qualified directly for the final, may come back for the small final. It is scheduled for 16.00hrs in arena 2.