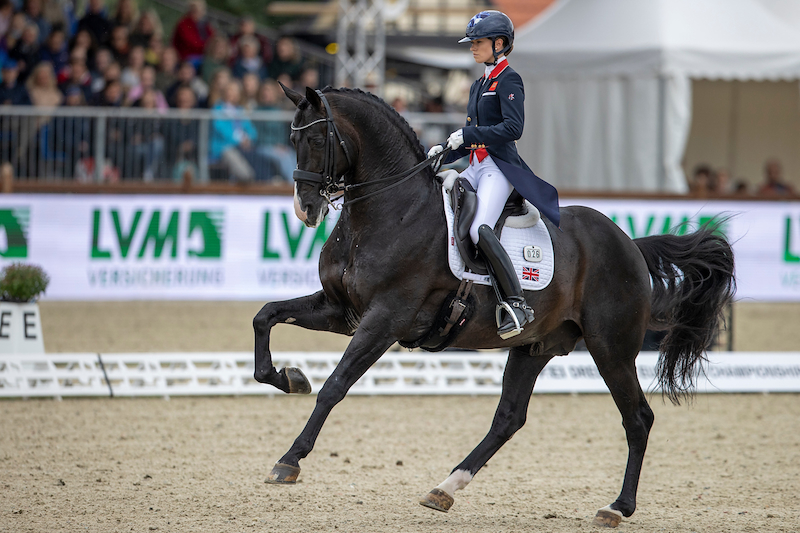 Charlotte Fry and the KWPN-stallion Everdale have just added the CDI3* Grand Prix of Ermelo to their list of achievements. The son of Lord Leatherdale scored 76.13%, besting his closest competitor by 3%.

Charlotte Fry seems to finish her outdoor season with a bang in Ermelo. After being crowned world champion in Herning, she grabbed the lead in the qualification for seven-year-old horses aboard Kjento and once again proves unbeatable in this CDI3* Grand Pix.

“Everdale felt great”, says Charlotte Fry. “We have primarily focused on Glamourdale this year, so Everdale is very excited that it is his turn now. He is super focused before and during test and upon receiving his winner’s rug, he gets so happy. Our freestyle to music tomorrow is the same we have performed at the Olympic Games in Tokyo. I am looking forward to it and I am certain Everdale loves to be in the spotlights of the main arena”, she reveals about the Lord Leatherdale-son (out of Aliska K elite EPTM-dres PROK by Negro) that was bred by Piet Kluytmans of Tilburg.

“The level was high in this class, but some combinations were a bit unlucky”, explains chairman of the jury Christoph Umbach. “Charlotte Fry showed her ample experience, although she ran into some minor issues in her test. Andreas Helgstrand has such a talented horse for the future with Queenparks Wendy, but she is still young and lacks some experience. Simone Pearce and Fiderdance are a relatively new combination, but already showed tremendous improvement. We saw a lot of horses in this class that previously competed at the WC for Young Dressage Horses, it proves that the WC is of great value to the big sport. In my eyes it is a sign of durability that these horses have developed from a young age onwards to the international Grand Prix.”

The second (73.04%) to come forward in the prize giving ceremony were Andreas Helgstrand and Queenparks Wendy. Ermelo is a familiar site for the daughter of Sezuan as she participated in the WC for Young Dressage Horses at five and seven years of age. In 2017 she obtained bronze in the final for five-year-old horses. The third position (71.60%) was claimed by Australia’s Simone Pearce and Fiderdance (s.Fidertanz), followed by Fabiënne Müller-Lütkemeier aboard Valesco (s.Vitalis) in fourth with a score of 71.32%.

Sisters Act MT OLD participated in the WC for Young Dressage Horses three times. Dorothee Schneider piloted this daughter of Sandro Hit to a 71.23% score, and therefore a fifth place, today. In 2016, the pair secured a sixth position in the final for seven-year-old horses. Lynne Maas and Electra (Jazz out of So What elite pref prest sport-dres PROK by Ferro, bred by Hans Bernoski and Richard van Heuvelen) obtained the best Dutch result through an eight placement. In ninth rank we find Gerion (s.Jazz) who placed eighth in the final for six-year-old horses a few years ago. Addict de Massa (s.San Amour), Ironman H (Bordeaux out of Zartina ster pref by Rousseau, bred by J.A.M. Hurkmans)) and Great Lady TC (Bretton Woods out of Tiffany’s Monday stb pref prest by Osmium, bred by Tim Coomans of Oud-Beijerland) are also former WCYH-competitors and that makes this class a very interesting to watch.