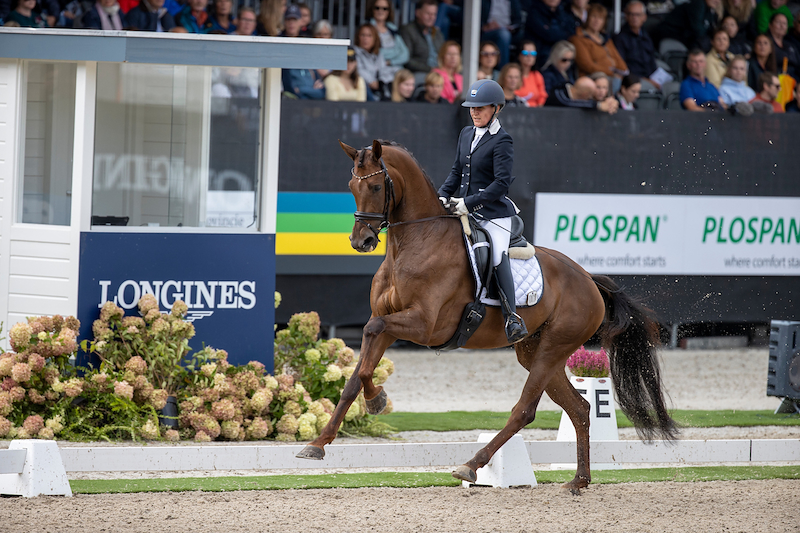 No less than seven KWPN horses had qualified for the final for four-year-old presented by Sport Pro Horses. The best Dutch combination today was Judith Ribbels aboard Nanny Mc Phee.

Crowds had flocked to witness the youngest participants perform in the final. Judges Bart Bax and Alex van Silfhout and therefore granted the young horses more time to get use to the buzzing atmosphere in the main arena. The final featured ten horses, each was given some explanatory notes from the jury. St. Athletique (s.Blue Hors St. Schufro) and the German Heiko Klausing triumphed with a score of 87.2. Judith and her chestnut mare were awarded higher marks for the trot and canter but saw their grade for submission drop after a minor miscommunication between rider and horse. It all added up to a total score of 87.0, a photo finish!

Alex: “A remarkable horse; very elegant and with expressive movements. In the walk we occasionally noticed some tension, but the trot and canter were fantastic, with a powerful hindleg and uphill frame.” Judith Ribbels has bred elite mare Nanny Mc Phee herself. The daughter of Vitalis comes out of the international Grand Prix dressage and elite mare FunFun EB, who she also brought to Ermelo for the Grand Prix. Bart Veeze’s Nero (s.Ferguson) excelled in the walk. The gelding was bred by Titan Wilaras out of the ster mare Git Odette W (s.Totilas). Today, he placed fourth. Alex: “An appealing performance of which the walk was a highlight; pure, active and with good overtrack. His frame was lovely in the walk and canter. Sometimes his self-carriage could be slightly better.”

Aniek de Laat placed seventh with the elite mare Namorka (Vitalis out of Rita Mora elite pref prest by Jazz, bred by Loucky Hagens-Goorsma), a vision of elegance in the ring. Femke de Laat piloted Nox (Furst Romancier out of Blue Bell s.Krack C, bred by A. Schepens) to the ninth position. The KWPN-approved Nick Wimphof and Wendy Kuiken were the last entry on the starting list today. “A beautiful horse with three good gaits. A pity he had a mind of his own at times, but certainly a talent for the future. Nick Wimphof is a son of Just Wimphof out of the elite mare Hiana (s.Bordeaux). The black stallion was bred by the Naber brothers.