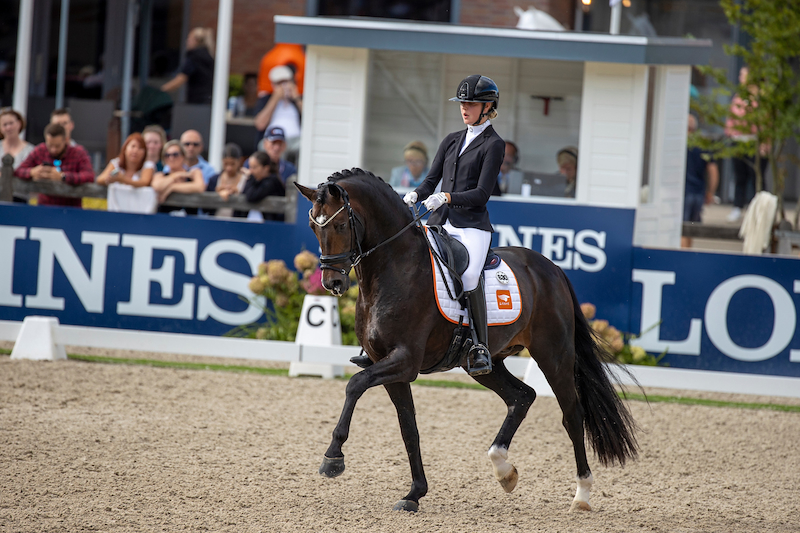 The final for six-year-old horses went down to the wire. Neither the qualification’s winner Hesselhoej Down Town nor its runner-up Las Vegas captured the title: Global Player OLD danced to gold. The KWPN-stallion Lennox U.S. and his merely seventeen-year-old rider Jill Bogers caught everyone by surprise and grabbed the bronze.

Jill Bogers must have nerves of steel to keep it together in such an exuberant atmosphere. A tough challenge for young horses and a especially a young rider. She delivered what she had set out to do: a solid test. Lennox U.S. (Grand Galaxy Win out of Herarona elite pref IBOP D-OC by Rousseau, bred by B. Wilschut of Bosschenhoofd) was the epitome of harmony, showing light-footed trot work and a powerful canter. Katrina Wüst comented on behalf of the jury: “The trot has a very good rhythm and is easy to collect, an 8.7. The walk should display more over track and a tad more freedom in the shoulder, a 7.9. The canter on the other hand is impressive and uphill, a 9.4. A horse that loves to work, so we give you a 9.5 for submission and 9.0 for perspective.” Adding it all up, the total score was 89%: bronze!

Las Vegas was one of the tipped favourites to secure a medal after the qualification. However, Emmelie Scholtens was not able to present the impressive son of Ferdeaux (out of Dalia Delin ster PROK by Wynton, bred by J. Deenen of Heijen) the way she must have envisioned it. The stallion still dazzled crowd with his enormous power and huge movements, the trot again received a 9.5. The walk was too tense for a high mark, a 7.9. “The canter was nicely uphill and showed so much aptitude for the collective work, a 9.6. However, you had issues in all four of the changes and we must bear that in mind when grading the submission and perspective.” The score for submission dropped to 7.9, while the stallion was granted an 8.8 for perspective. An 87.4% total resulted in the fourth place.

The fifth rank was also claimed by a KWPN horse. Lord Platinum (Ferguson out of How Pretty Platinum ster by Bretton Woods, breeder Titan Wilaras of Riel) showed a lovely test under Fransisco Benitez Sanchez, although it was not as harmonious as Friday. “The trot is light-footed, an 8.5. The walk was great on the diagonals, but a little tense in the pirouettes, an 8.8.” An 8.8 for the canter and perspective and 8.5 for the submission brought the total to 86.8%.

Kirsten Brouwer and the Ferguson-daughter Lightning Star (out of Daily Enjoy elite pref IBOP-dres sport-dres PROK by De Niro, bred by Titan Wilaras) scored 84.6% and ranked eighth. “The trot was expressive and shows an active front leg, an 8.8. The walk has good over track, but could be more regular at times, a 7.9. The canter is uphill and elastic, an 8.8. The mare got spooked once, but she is clearly very eager to work, an 8.0 for submission. We give her an 8.8 for perspective.”