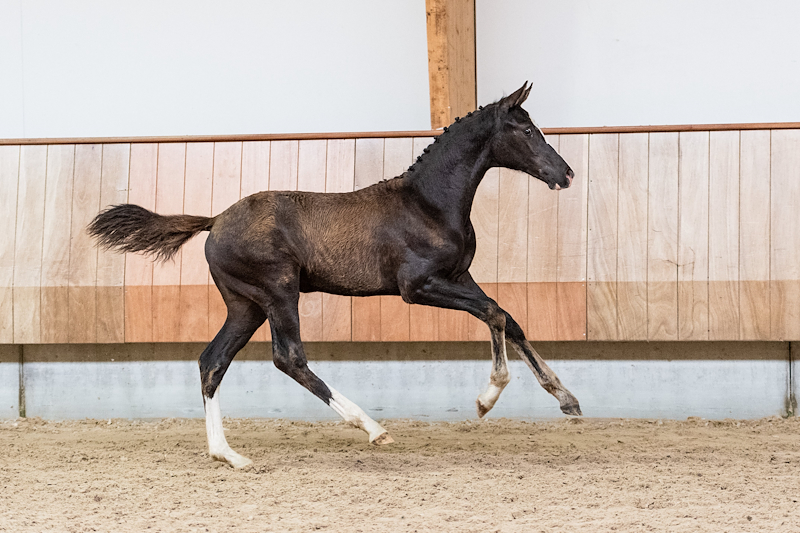 September 23 until 26 you can place your bid on 23 dressage foals and 18 jumper foals in the sixth KWPN Online Foal Auction. Foals originating from the dam lines of Grand Prix sport horses such as Paloma (s.Ferro), Broere Karmijn (s.Damiro), Bolero (s.Johnson) and world champion Kjento (s.Negro) are put under the virtual hammer this edition. The collection also includes a half-sister of Blom Cup champion Mister SFN.

The last editions of the KWPN Online Foal Auction were characterised by good sales percentages and an international network of buyers. The auction platform provides buyers access to carefully bred foals that have been checked by a KWPN-inspector and veterinarian.

During the Blom Cup, Mister SFN (s.Grandorado TN) made a lasting impression by winning the final for five-year-old horses under Hessel Hoekstra. His half-sister Soranya van de Reesterhof (s.New Pleasure VDL) is one of the interesting jumper foals in this collection. Her dam Valery also foaled the 1.45/1.50m jumper Caapverdi (s.Verdi). The granddam of the colt Sydney (s.Impressive VDL) jumped at international 1.45m level and is a full sister of the KWPN-approved stallion Maximus VDL (s.Zirocco Blue VDL). In the fourth generation, this line traces back to Eric van der Vleuten’s Grand Prix mare Paloma (s.Ferro). The filly Signora Dora E.E. (Monator vd Radstake x Canturano) is bred out of a 1.30m mare that is the half-sister of international 1.50m showjumpers Azuro (s.Karandasj), Christiaan (s.Verdi) and Djoanna (s.Verdi).

The entire collection can now be viewed on www.kwpn.auction. Friday the 23rd of September the auction opens. To place a bid on the foals of this collection one must first be registered as a bidder. Monday September 26th the auction closes from 20.00hrs onwards. If you are looking for more information about the foals, a KWPN Inspector is happy to help. Additionally, our sponsor Horses2Fly can assist you in any international transport. If you have any questions, please contact Mairin van der Tol via salespromotion@kwpn.nl, 0341-255511.