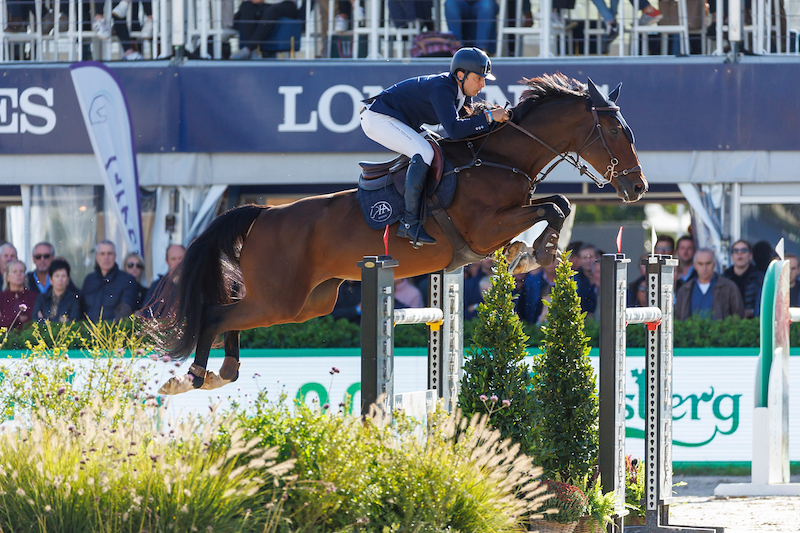 Two KWPN-bred horses reached the top-10 in the WC final for seven-year-old jumper horses. Unfortunately, a medal was not in the cards, the Carrera VDL-daughter Koningin place sixth.

The course designers had built a delicate 1.45m course in the main arena of Domein Zangersheide. In the concluding championship final, eight combinations out of 40 entries advanced to the jump-off. Among them the Blom Cup winner Keep It Cool SSS (Zirocco Blue VDL out of Wyoming-S elite EPTM-spr sport-spr PROK by Corland, breeder Eddy Schoonhoven) ridden by Michael Greeve. One pole precluded the vice-champion of the Blom Cup, the quick Kivinia sport-spr (I’m Special de Muze out of Favinia ster sport-spr PROK by Calido I, bred and owned by Geert Moerings) and her rider Bas Moerings from the jump-off.

The second KWPN horse in the jump off was the Carrera VDL-daughter Koningin (out of Exelle by Upgrade, breeder M. Possenti) ridden by Hugo Alvarez Amaro. The scopey mare drew a lot of attention and incurring one rail in their concluding round, the pair placed sixth. Two ranks ahead of Keep It Cool SSS that was less fortunate in this thrilling climax. “Koningin has an incredible attitude, and we have a lot of interest in her, I hope we can hold on to her for the Spanish team in the future”, responds her rider pleased. Whether the Spaniards know the meaning of her name? “Yes, absolutely and she is aptly named, because she is the queen!”