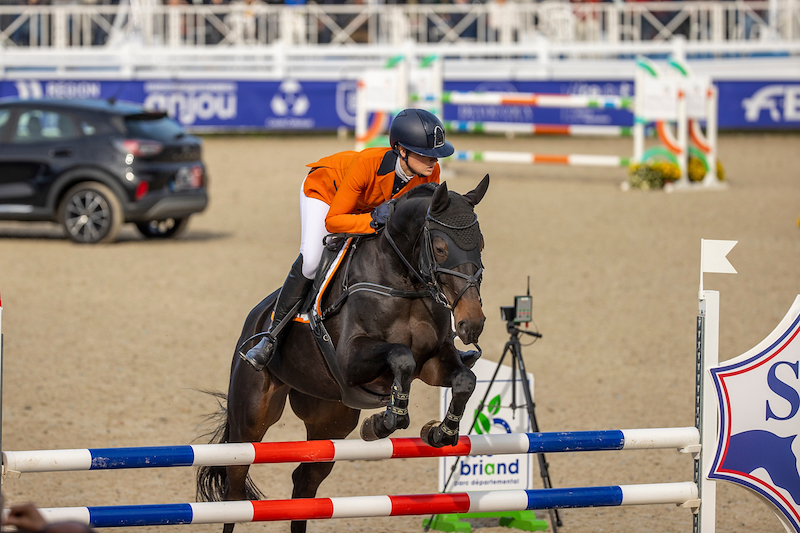 Last week, the WC Young Eventer Horses for six- and seven-year-olds was ridden in Le Lion D’Angers, France. The six-year-old Larosaleen W obtained the best result for the KWPN as she placed fifteenth.

Sanne de Jong steered the KWPN mare Larosaleen W (Karandasj out of Harosaleen stb by Albaran xx, bred by Jan Greve of Haaksbergen) to the fifteenth position. Last year, the pair was crowned KWPN champion of the five-year-old eventer horses. After the dressage test the two held an intermediate fourteenth rank. By remaining clear in the cross-country on Saturday they climbed up to the ninth place. In the concluding jumping course on Sunday the mare incurred four penalties, dropping her down to the fifteenth position.

The six-year-old Linkin Park K (Emir R out of Pebbles NK by Pablo, breeder D. Kajuiter of Zevenhuizen) was in the running for a medal after the cross-country. The Emir R-offspring placed sixth in the dressage test and soared to a fourth place in the intermediate rankings after his impressive clear cross-country. Unfortunately, Linkin Park knocked down two poles in the jumping course which meant he ultimately had to settle for the seventeenth place.

Hanne Wind Ramsgaard also made it top half of the six-year-old entry field aboard KWPN mare Linn (Etoulon VDL out of Glinn ster by Arezzo VDL, breeder W.J. van Gurp of Luttelgeest). The combination placed 22nd.

The best KWPN result among the seven-year-old horses was obtained by Kizzy-Jane (Vittorio out of Grace-Jane vb PROK by Hopalong Cassidy, breeder Damstra of Arum) in rank 34. Ridden by Laurine Thijs of Belgium the mare obtained 62.8% in her dressage test, startin off the championship from the 59th position. Thanks to a good cross-country and jumping round, the mare could climb up in the final standings.