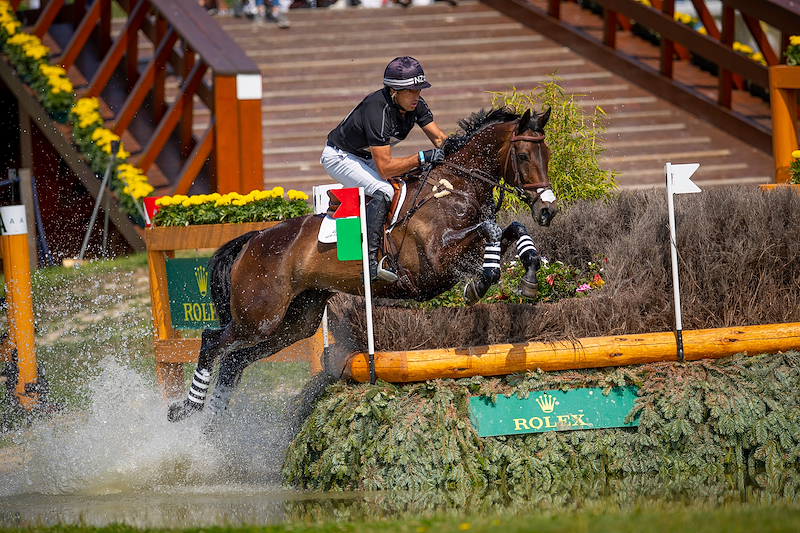 After Tim Price’s win in the CCI-4* of Boekelo aboard his ten-year-old KWPN-bred Happy Boy, we look back to an interview with New Zealand’s eventing couple Tim and Jonelle Price previously published in the KWPN Magazine in 2018.

The couple is extremely successful in the eventing sport and as their string of horses includes Happy Boy (Indoctro out of W.Amelusina 17 ster prest by Odermus R, breeder A. Rijpma of Lieveren), Jarillo (Dantos HBC out of Fiorilla by Alicante HBC, breeder R. Vriend of Odoorn) and Grappa Nera (Karandasj out of Cetunette reg. A PROK by Babalouba, breeder H.J. Booy of Neede) the share of KWPN stars in their stable is remarkable.

Tim (1979) and Jonelle (1980) both started their equestrian career in New Zealand. Tim grew up with horses, Jonelle’s love for horses sparked when she was eight years of age.

In 2005 the pair decided to take a chance on reaching the top of the eventing sport and moved to England. Their Mere Farm in the county of Wiltshire is a small piece of New Zealand at the heart of England. During the 2014 World Equestrian Games, they made the first couple that competed in one team, and they repeated that feat at the Olympic Games of Rio and Tokio. They both secured a top-20 position during the WEG of Tryon in 2018.

The Price’s horse stock is very diverse. “We’ve got maybe two riding horses below six years of age in our stable, all the others are older. I usually have around twelve horses and Tim around fourteen”, Jonelle discloses. “We own two horses ourselves and the others are trained by us for their owners. We want to have a selection of horses in our stable that have specific qualities for various types of major shows. A horse such as Badminton winner Classis Moët, a.k.a. Molly, does not fit in Aachen, so she won’t show there. It is a typical horse for competitions such as Badminton and Burghley. Of course, it all depends on the horses that cross our path, but we have a lot of different horses in our stable.”

Depending on the time of the season, Tim and Jonelle employ between six and eight staff members to take care of the daily tasks. In the stables, everyone works together, but they also work side by side in the daily training. “We train together and with the same trainers, but we do not train each other. If we go to an event together, we try to be there for each other in the warming up, but we also do our own thing. We teach very little ourselves. We want to focus on our rider careers and everything on the side takes off the focus on our main goal.”

A second place in the 2018 WBFSH ranking made Cekatinka (King Kolibri out of Katinka ster prest by Julio Mariner, breeder Jan Greve of Haaksbergen) the highest ranked KWPN horse thereby making a significant contribution to the KWPN’s leading position in the ranking that year. Both the mare and Wesko hold a special place in the hearts of the Price family. Originally, it was Jonelle that rode the mare but because of her pregnancy and with the 2018 World Equestrian Games in mind, Tim temporarily took over the reins. In 2017 Tim and Cekatinka won the Military of Boekelo and the combination placed eighth in the World Equestrian Games of Tryon. When asked if she will take Cekatinka back next year, Jonelle quips: “That’s the million-dollar question; our plan was that Tim would compete her at the WC and we would reevaluate after. Cekatinka is such a unique horse. She does not have unlimited scope nor fantastic movement. She is beautiful and has a fantastic character. The Dutch horses we have are true athletes. They may not be horses with an enormous amount of blood, but they feel like blood horses, and they are athletes that want to give it their all and they love to canter. That makes them great eventer horses.” The mare was sold in February 2019.

Karandasj-offspring Wesko (out of Kolien ster pref prest by Mytens) has gained fame in the eventer community. His striking blaze and incredible attitude won over a lot of hearts. In Luhmuhlen in 2014 he secured Tim Price’s first victory in a 4* competition. Right before the Olympic Games of Rio he got injured and he was out of the spotlight for a while. In 2018 Wesko was back and he achieved some impressive results once again. Tim Price describes the breeding product of R.J.M. Schoenaker of Rutten. “I don’t believe I have ever had a horse like Wesko. He is fantastic and unique to work with, I always enjoy working with him. He reminds me of a tennis star, he enjoys being in the spotlights. He also resembles a big pony, he easily gains too much weight and has an enormous amount of hair in the winter”, tells Tim about the apple of his eye that is said to have a fondness of bananas. In the years after, the combination triumphed in multiple CCI3* and CCI4* competitions. Due to an injury, Tim Price had to withdraw the horse from the Olympic Games of Tokyo.

Nowadays, Tim campaigns the KWPN horses Happy Boy and Jarillo at respectively CCI4* and CCI3* level. He was victorious in the CCI4* of Boekelo aboard Happy Boy and the pair additionally placed fourth in the CCIO4* Nations Cup. At seven years of age, the Indoctro-offspring obtained gold at the 2019 WC for Young Eventing Horses. Jonelle competes at CCI5* level with the KWPN-bred Grappa Nera.