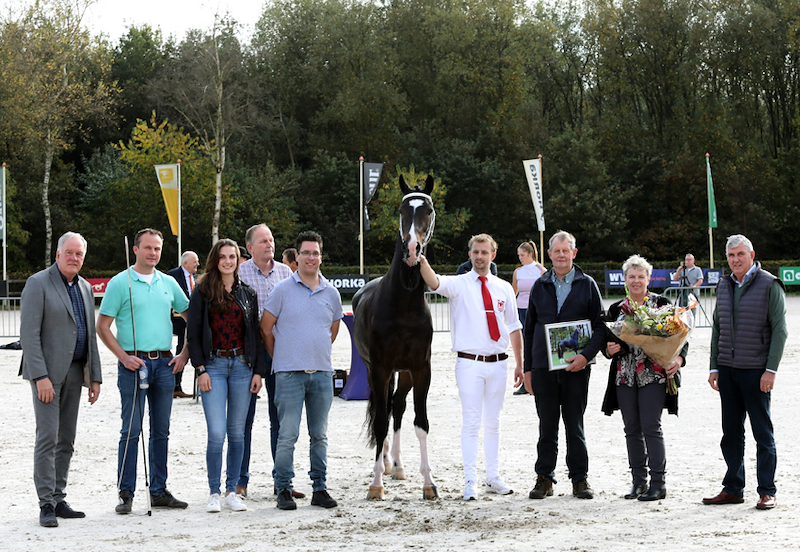 A large crowd had flocked to Ermelo to witness the approval of for harness stallions last Saturday. Icellie-offspring Oberon was the top scorer of the afternoon as he was awarded five 8,5s and one 9 for his front leg technique.

During the final exam of the 21-day performance test, all stallions were once again presented in a lovely manner by Demi van Nispen, head of training. She guided all four stallions to approval. She received flowers as a sign of appreciation for her great work.

After the individual in-harness presentation all four stallions returned to the arena where they were shown in-hand and received comments and results of the jury. Lambertus Huckriede of Enschede was the most successful submitter of the day as two of his stallions received a breeding license. Harrie Tonnaer bred the top scorer Oberon (Oscar-T). The jury consisted of chairman Lammert Tel, Thomas van der Weiden, Bauke de Boer and inspector Viggon van Beest.

Lammer Tel: “This is a strong group that earned good marks in general. We were, having kept the assignment of the Breeding Council in mind, able to approve a stallion that can increase the genetic diversity in our breeding, in this case a thoroughbred-hackney. The stallions that were evaluated by us multiple times, all made great progress towards the final exam.

Freshly registered in the KWPN are two three-year-old Icellie-offspring, one five-year-old Atleet-son and a four-year-old thoroughbred-hackney. Of course, the breeders were asked to step forward and join their homebred stallions in the award ceremony as they were bestowed with flowers and a beautiful picture. The stallions concluded the afternoon with a happy in-hand lap of honour that caused the audience to erupt in applause.

The following stallions were approved

The reports (in Dutch) are listed below. Information about the conformation and a report on the dam can be found in the KWPN Database.