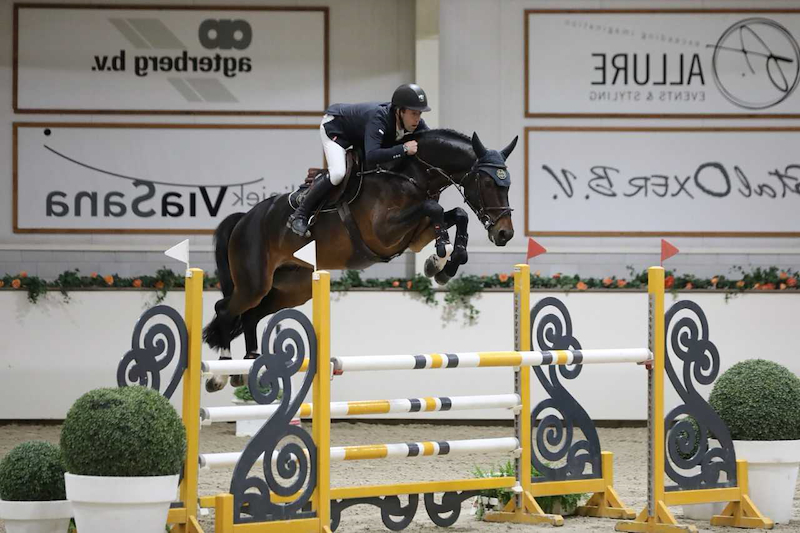 Fresh of the heels off his KWPN-approvement, Kentucky TMS Z sped to the victory in the Blom Stallion Competition. Ridden by Maikel van der Vleuten the stallion proved his ability to win even with such a preparation.

The entry list in the Z/ZZ-class featured twelve stallions, two jumped a 1.35m course and ten competed at 1.30m height. Seven combinations qualified for the jump-off in the main arena at the Peelbergen Equestrian Centre.

Kentucky TMS Z (Kannan out of Elite van Prinseveld by Toulon) of breeder Tal Milstein, Stal van der Vleuten and Kees van den Oetelaar completed his 21-day test in Ermelo with flying colours yesterday as he was registered with an 82-point total. He was granted a 9 for his attitude and today he demonstrated why. He was very cooperative in his first jump-off with Maikel and sped to the fastest time. “I have not ridden a quick round with him before, so the fact he is so willing hints to his perspective. He has cleared so many courses throughout the season and that is a crucial quality. He has a great mindset and is sharp by nature. This was my first ride with him after the performance test and he feels great, they have kept him fit and happy”, smiles Maikel. Needing merely five hundredths of a second more, Pieter Keunen and Aganix du Seigneur-offspring Lambada Shake AG (out of Grappa AG by Spartacus, breeder Alex Gisbertz) were breathing down Kentucky TMS Z’s neck. Competing in front of their home crowd, the stallion showcased his ease, scope, canter, and mindset. Effortlessly clearing two courses at 1.30m height Lambada Shake AG is off to a strong start in this stallion competition. The winner of last year’s leg in Limburg, the For Pleasure-son For Friendship and his rider Wesley de Boer finished third after a clear and safe jump-off.