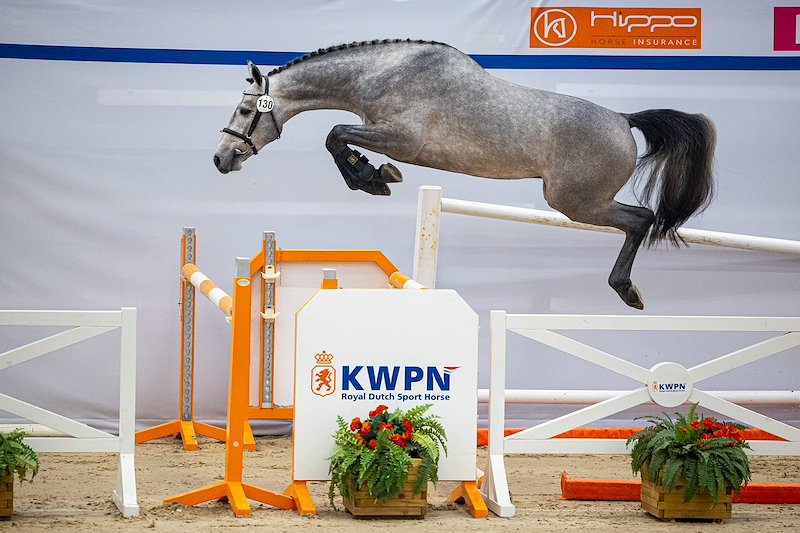 From the 23th to the 27th of December, the KWPN Online Stallion Auction offers the opportunity to make your Christmas extra special. The collection is presented today and includes 20 dressage and seven jumping stallions, some of which are invited for the second round viewing at the beginning of February. Sons of Le Formidable, Hardrock Z, Glock's Toto Jr. and Tangelo van de Zuuthoeve are offered in this online auction.

All selected stallions have been presented in the first round viewing of the KWPN stallion selection and have undergone a full veterinary inspection, both clinically and x-rays. In addition, they were examinated by a KWPN inspector during the first phase of the stallion selection. One of the 27 stallions has been invited to the KWPN Stallion Show (1-4 Febr), where the Kardesh son Pearl Jam is expected in the second round viewing.

Closely related
Several half-brothers of KWPN approved stallions are offered in this auction. For example, Perfect Boy HT (s.Imposantos) comes from the same dam as the stallion Kyando (s.Arlando), who is currently performing at Small Tour level, while the Lord Europe son Pro Europe has been bred from the same dam as the KWPN approved stallion Impression (s.Don Schufro), who has now been sold to Switzerland after a winning Grand Prix debut under Diederik van Silfhout. Also closely related to successful dressage horses are for example Panthos (s.Imposantos), who is a half-brother of the Small Tour horses Godin, Hortense Marie and Florestan, while the Jameson RS2 son Phantom J&G was bred out of a half-sister of the Grand Prix sport and breeding stallion Fidertanz (s.Fidermark). The Taminiau son Philotas van Amstel was bred out of a full sister of the Grand Prix horse Ferrero (s.Rhodium) ridden by Jennifer Sekreve and the Glock’s Toto Jr. son Pontius de Tjonger is a half-brother of the Small Tour horses El Mundo and Fleetwood RR. The damlines of top horses like Jerich Parzival, Apache, Zirkoon and Charmeur are also represented in this collection of dressage stallions.

Jumping stallions
Show jumping enthusiasts should also pay attention to this collection. For example, the Kardesh son Pearl Jam, who is invited for the second round viewing, comes from the proven damline of multiple Grand Prix winner Creedance ridden by Kent Farrington. The promising Punkrock Baraka, who is sired by the Olympic stallion Hardrock Z, also comes from a damline from which various 1.50/1.60m level jumping horses originate. The Kannan Jr. son Portos is a half-brother of two 1.45m level showjumpers including the successful Djumpsina SFN, and also very promising is the Tangelo van de Zuuthoeve son Pentagon who is a direct son of the internationally 1.50/1.60m level competing mare Cantate (s.Cantos) of Paul van Wylick. In Perfect’s pedigree, the up-and-coming top sire Grandorado TN is linked to the proven Minka damline. All in all, a collection to definitely sit down for during the Christmas days.

Do you have any questions about this online auction? We are happy to help! Please contact Mairin van der Tol via salespromotion@kwpn.nl, 0341-255511.