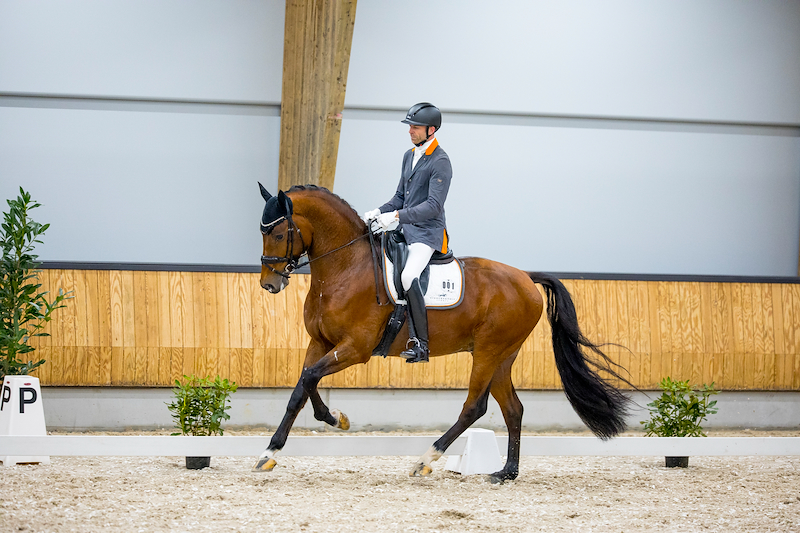 Dennis Ausma skilfully piloted Mexpression (Expression out of Colinda preliminary keur PROK by Koss, bred by H.A. Bruil of Terborg) to a final score of 81.6 points. The stallion was a little tense in the previous competition in Kronenberg, but redeemed himself in Ermelo. Bart Bax commented on behalf of the jury: “This stallion has a tremendous presence. His posture and front immediately catch the eye and he is so expressive in his movements. At the start of the test, he was somewhat tense in the walk, but as the test progressed this gait improved. The walk has sufficient over track, but could be more swinging in the back, a 7.6. The trot is forward and included good extensions, an 8.5. In the canter his posture stands out again as the stallion is shows a good push off the ground, an 8.4. The stallion was very obedient throughout the test and receives an 8.2 for submission and 8.2 for overall impression.”

Mckenzy JHL (Alexandro P out of Hapiness elite IBOP-dr PROK s.Saron, f: L. Roerdink of Groenlo) and his rider Diederik van Silfhout were the first to set foot in the arena tonight. Bart Bax announced the result of 79.2 points afterwards. “An impressive stallion that carries out his work under saddle very well, it was an obedient performance with beautiful transitions. We award a 7.2 for the walk, this gait could be more active and more elastic. In trot, the stallion demonstrates ample self-carriage, a beautiful front leg technique, but the hind leg could be slightly more active, an 8. The canter shows abundant balance, is light-footed and the horse shows ample ability to package his strides. Although the stallions has plenty power, he could be more forward in this gait as well. We give him an 8.5 for the canter. The stallion responds correctly to the aids of his rider, so the submission is awarded an 8,0 and finally, the overall impression is given a 7.9.”

Markant BK (Wilson out of Wiezelma preliminary keur preferent s.Sirius, bred by L.W.M. Kollenburg of Best) seized the win in Kronenberg, this time he had to settle for the third spot. Jean René Luijmes guided the stallion to 78.4 points. Bart Bax explained: “A big stallion that is very obedient in the test and is sound in the movements. We give him a 7.3 for the walk, the active and forward trot receives a 7.6. The stallion displays so much power and push in the canter, an 8.3. Jean René presented the stallion very well; all exercises were performed in a correct manner. We therefore give them an 8.1 for submission and 7,9 for overall impression.”