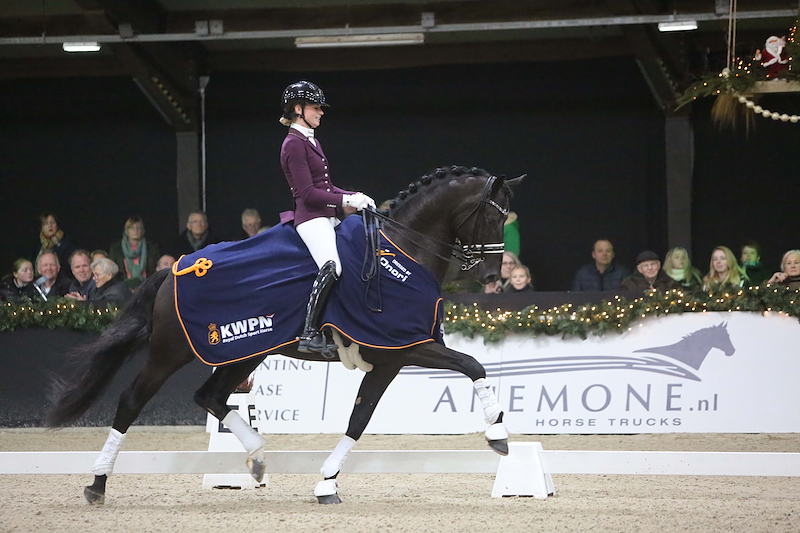 Despite the lack of competition, the KWPN-approved Lowlands is not dropping any stitches in the Anemone Horse Trucks Stallion Competition Dressage. In fact, the Millennium-offspring and Dinja van Liere obtained their highest score so far: 86,2 points.

Exloo forms the stage for the stallion competitions dressage and jumping today. Dinja van Liere and Lowlands (Millennium uit La Donna S v.Donnerball, f: B. Schrapper, Groenheim Duitsland) were the first combination to set foot in the ring in the Z-class. The stallion owned by Reesink Horse of Eijbergen was awarded an 8,7 thrice, for the walk, submission, and overall impression. The trot generated an 8,6 and the canter was marked an 8,4. “This was a beautiful performance! This stallion shows to possess ample talent for the collection. In the extended walk he covers a lot of ground and moves with a swinging body. In the canter he remains straight in the extensions but could keep his withers more elevated at times. The stallion shows to be willing and is responsive to the aids”, commentating judge Patricia Woltens explained afterwards.

Unable to make it to Exloo? Follow the stallion competition dressage and jumping via the livestream at KWPN.tv.

Buy your tickets for the finals

The finals of the Anemone Horse Trucks Stallion Competition Dressage take place on Saturday night February 4 during the KWPN Stallion Show in Den Bosch. You do not want to miss this thrilling conclusion! All practical information and the programme can be found here. Tickets can be ordered in the ticketshop.