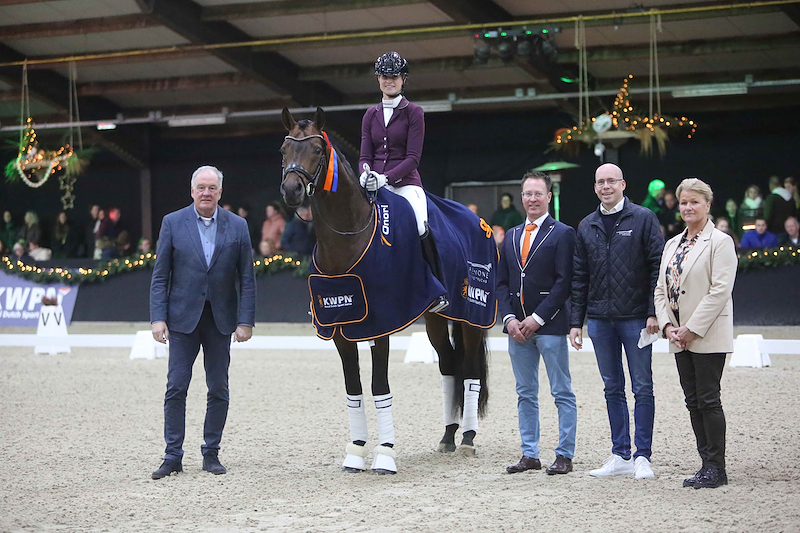 The M-class of the Anemone Horse Trucks Stallion Competition Dressage has evolved into a clash of the titans between McLaren and Dinja van Liere and My Blue Hors Santiano ridden by Renate van Uytert-van Vliet. The Morricone-son claimed the win in the first competition, only for the Sezuan-offspring to retaliate in the second competition in Ermelo. Today it was again McLaren who was donned the winner’s rug.

No less than four nines helped the KWPN-approved McLaren (Morricone out of Samatha s.Sir Donnerhall, bred by U. Toenjes of Ganderkesee) tip the balance in his favour. The jury, composed of Patricia Wolters and Bart Bax, praised his light-footedness, expression, and balance. On the merit of his beautiful front limb technique, the trot generated the first 9,0. “The walk is pure but could cover more ground and be more supple throughout the body in the extensions, an 8,2. In the canter we see this stallion has such an aptitude for collection and extensions, so we reward this gait with a 9,2. It was a harmonious test in which this stallion shows to be willing and responsive to the aids of the rider.” Both the submission and overall impression were marked a 9,1; bringing the total to a respectable 89,2 points.

The KWPN-approved My Blue Hors Santiano (Sezuan out of Romanik s.Romanov Blue Hors, bred by Straight Horse APS of Alleroed) and Renate van Uytert-van Vliet followed in close pursuit, obtaining 88,8 points for their performance. “This horse has a beautiful silhouette in trot (8,8). The walk is spacious and shows a swinging body, an 8,6. The canter has such an immense jump and thrust, the withers always elevated, and this horse displays great talent for collection as well. We award Blue Hors Santiano a 9,1 for the canter.” A 9,0 for submission and 8,9 for overall impression completed his list of marks.

It has become evident that the competition for the title is still wide open. Moreover, Dinja van Liere showed that the KWPN-approved Mauro Turfhorst is another contender to watch out for in the finals in Den Bosch. The elegant stallion fetched 87,8 points in total with his harmonious test. “The trot is consistently uphill, featuring great self-carriage and a beautiful front leg (8,7). The walk is active and so sound, even right after the transitions, and shows good over track (8,9). The withers are well-elevated in the canter, but the hind leg could show a tad more flexion (8,5). This stallion is willing, responsive to aids and keeps focused on his rider. So, we award him a 9 for submission and an 8,8 for overall impression”, Patricia Wolters concludes.