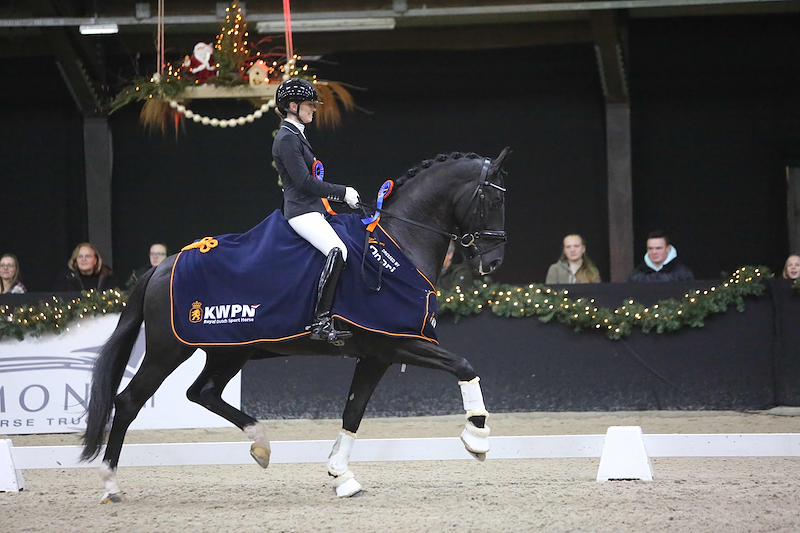 After two victories in the L-class of the Anemone Horse Trucks Stallion Competition Dressage, Kim Alting’s Dark Rousseau was dethroned in Exloo by Nalegro and Charlotte Fry. The Painted Black-son secured the win with 88,8 points.

The jury table in Exloo seated Bart Bax and Patricia Wolters. The latter provided each combination with the marks and comments after the test and was visibly enthusiastic about the performance of Nalegro (Painted Black out of Jalegrofleur ster PROK s.Negro, f: J.L. Hanse of Burg-Haamstede and Van Olst Horses) and Charlotte Fry. “What an impressive and alluring stallion with such an imposing front! This is truly a talented dressage horse, all exercises were performed so effortlessly. The trot is powerful, has great technique and a strong hind leg, a 9,0! He walks with good over track and the transitions were beautiful (8,8). The canter shows abundant balance and thrust, and the hind quarters are well-engaged and placed under the mass (8,9). The stallion was presented in a lovely manner and was very obedient. The connection in the transitions could be more fluent to get a higher mark for submission (8,8). And finally, the overall impression is given an 8,9.” A solid result for the Painted Black-son that was bred out of the full sister of Charlotte Dujardin’s Valegro.

The KWPN-approved Dettori-offspring Dark Rousseau (out of Westside prelim keur PROK s.Rousseau, bred by H.G.A. Verdellen, reg: Reesink Horses) triumphed in the first two stallion competitions with Kim Alting. Today, the combination emerged in second place after gathering 88 points. “An elegant and light-footed stallion. The walk is uphill and is characterised by its elasticity, an 8,7. The side pass comes easy to Dark Rousseau, and he maintains his balance in this exercise very well. The walk is pure, with a swinging back and good over track (8,8). The canter is jumped well off the ground but could be more resigned for a higher mark. The transitions were beautiful however, an 8,6. This is a willing horse that is very cooperative so we grant him a 9,0 for the submission and an 8,9 for the overall impression.”

Although there were three prizes to be handed out, solely two horses entered the ring for the prize giving ceremony. On the account that Charlotte Fry also claimed the third position with the KWPN-approved Negro-son Nacho (out of Benetton ster pref D-OC s.Krack C, bred by S. Maakenschijn, reg: Van Olst Horses). “A sizeable stallion that shows us an uphill frame but could develop more strength. The stallion kept focusing on his rider throughout the test and thus earns a 9,0 for submission.” The 8,3 for the walk, 8,4 for the trot and twice an 8,8 for the canter and overall impression added up to 86,6 points in total.