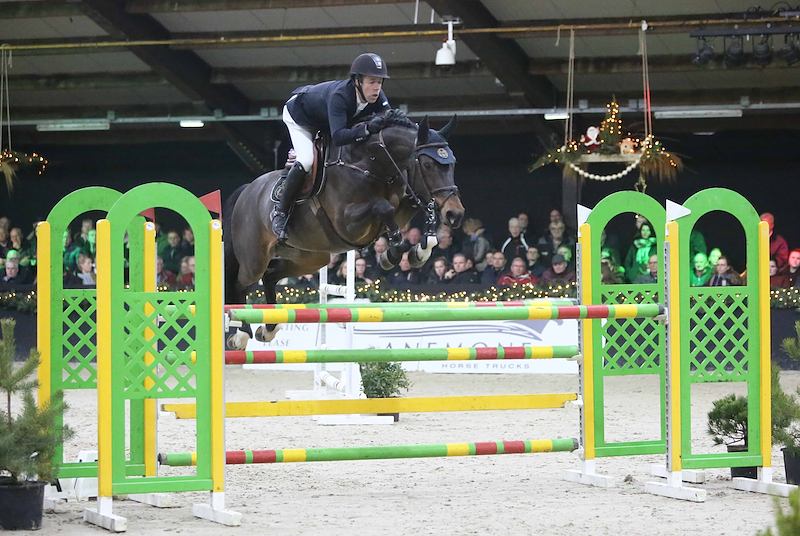 The combination Maikel van der Vleuten and his KWPN-approved Kentucky TMS Z (s.Kannan) seem unbeatable in the Blom Stallion Competition at 1.30/1.35m level. For the third consecutive time, the competition had no answer to their performance as the pair crossed the finishline in the fastest time.

The six-year-old Kentucky TMS Z (Kannan out of Elite van Prinsenveld by Toulon, bred by Tal Milstein Stables of Asse BEL) and Maikel van der Vleuten are in a league of their own. Following their triumph at De Peelbergen and De Meern, they added the victory in Exloo to their list of achievements tonight. Nine combinations qualified for the jump-off and the duo were the last to start. Van der Vleuten eagerly piloted the Kannan-son through the shortened course. The timer stopped at 37,45 seconds, which was less than any of their competitors before them.

Another top placement for Lambrusco

The second ribbon was awarded to the AES-approved Kornet’s Boy (appointed D-OC by Cornet Obolensky out of Pinostardorijke stb-ext prest s.Quick Star, f: H.W.A.M. Tiemessen) that performed a clear 1.35m round in 38,36 seconds with Ruben Dario Ramirez. The KWPN stallion Lambrusco (Entertainer out of Total Touch stb-ext pref prest s.Lux, bred/reg: L. Keunen-Hanssen, reg: HX Stable) was the runner-up of De Meern and grabbed another top placing in Exloo. A clear jump-off in a time of 39,90 seconds proved more than sufficient for the third position.