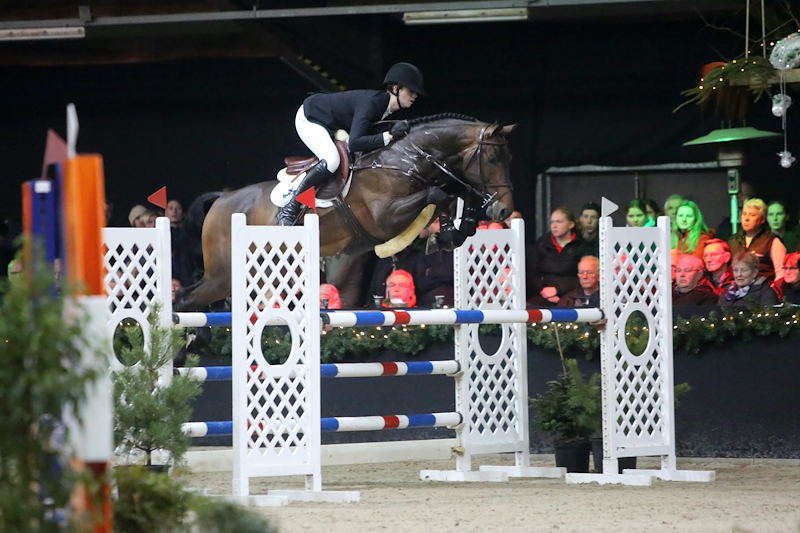 The KWPN-approved stallion Stargos VDL and Iris Hakvoort scored a hattrick in the Blom Stallion Competition Jumping tonight. They cleared the jump-off at 1.20m height in the quickest time and thereby won the third competition of the season.

Iris Hakvoort skillfully piloted Stargos VDL (Stakkato Gold out of Estella sport-spr s.Conthargos, bred by: W. Winkeler, reg: VDL Stud) through the basis course before being the first entry in the jump-off. The careful and agile stallion has a natural aptitude for the jump-off. The pair stopped the timer at 35,19 seconds, a result none of the following combinations could improve upon.

For the third time in a row, Mart IJland and Mees vd Watermolen (Vannan out of Holinda ster by Carambole, breeder/reg: J.W. Greve of Haaksbergen) were the second combination to be called upon in the prize giving ceremony. The scopey KWPN stallion impressed once again and his double clear proved a worthy shot at the win as the time difference was only 0,14 seconds.

The third price was awarded to Don Tarpania Z (s.Dominator Z) and Lars Kuster. They took took 39,22 seconds to clear the jump-off, staying ahead of the other Stakkato Gold-son in the top-five. Joep van der Kampen and the KWPN-approved Menno H (out of Toy ster pref sport-spr s.Baloubet du Rouet, breeder/reg: P.H. van Hees) ended in fourth place. Eight combinations made it to the jump-off, including two other KWPN-approved stallions of VDL Stud. McAllister VDL (Inaico VDL out of Zoklahoma ster pref prest s.Emillion) and his rider Wesley de Boer proved to be quick, but incurred one pole. Cristel Kalf was well on her way aboard Maximus VDL (Zirocco Blue VDL out of Daloma elite IBOP-spr sport-spr PROK s.Verdo, breeder/reg: H.W.J. Grol) but mistakes on the last two fences demoted them to the eight rank.