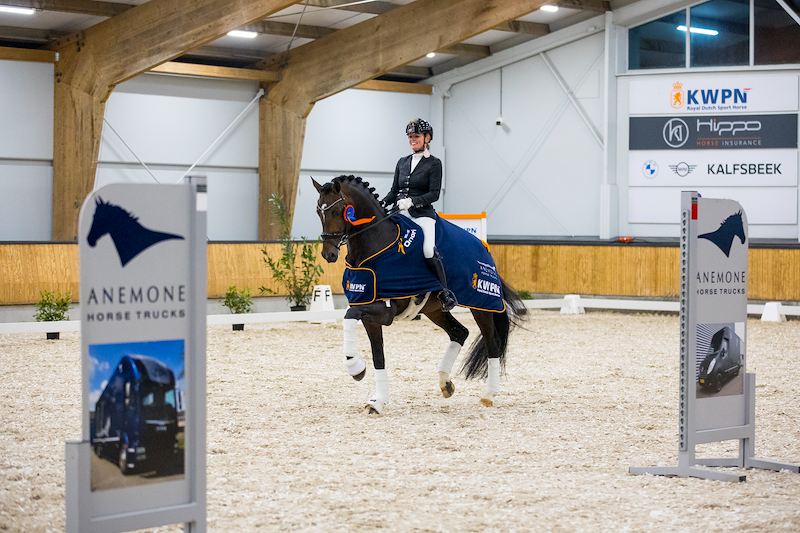 The top 5 sires of the dressage foals born last year is as follows:

Approved in 2021 with 87,5 points, My Blue Horse Santiano (Sezuan out of Romanik v.Romanov Blue Hors, bred by Straight Horse APS of Alleroed) presented his first crop the year after. Siring no less than 253 dressage foals, he immediately tops this ranking. Last summer, the stallion won the Pavo Cup for five-year-olds. As we speak, the stallion is competing for another title in the Anemone Stallion Competition Dressage 2022/2023 M-class. The final is ridden at the KWPN Stallion Show 2023 in Den Bosch.

The top performing KWPN stallion Las Vegas (Ferdeau out of Dalia Delin ster PROK by Wynton, bred by J. Deenen of Heijen) added 251 KWPN-registered dressage foals to his name this year and thereby secures the second step pf the podium/ the seven-year-old Las Vegas has accumulated an impressive list of achievements. He triumphed in the 2021 Pavo Cup after securing three 10s and won the M-class of the 2022 Anemone Stallion Competition. He furthermore competed in the finals of the World Breeding Championships for Young Dressage Horses in both 2021 and 2022.

Horse of the Year 2022 and the World Champion Young Dressage Horses 2021 and 2022: Kjento (Negro out of Zoriana elite pref prest IBOP-dres PROK by Jazz, breeder Ad van Os of Sprang-Capelle) takes the third position in this year’s ranking. His tally of offspring was expanded by 237 dressage foals in 2022. The stallion topped the 2020 list as he produced 306 KWPN-registered dressage foals that year.

The For Romance-offspring For Ferrero (out of Dubai Millenium by Don Crusador, breeder Stal de Biebosschen of Londerzeel BEL) slots in fourth place as his total amounted to 174 registered dressage foals. The now nine-year-old stallion was granted his KWPN breeding license in 2017 as he obtained 87 points for his performance test. Last august, the stallion made his winning debut in the Small Tour. In 2021, his son Nirvano (ds.Charmeur) was approved.

Also siring 174 KWPN-registered dressage foals, the KWPN stallion Jameson RS2 (Blue Hors Zack out of Atilinda M elite pref IBOP-dres sport-dres D-OC by Negro, breeder Stal 104 of Wijdewormer) shares the fourth place. Jameson RS2 was the champion of the 2017 KWPN Stallion Show. In 2018 he was approved at the KWPN after obtaining a whopping 90-point result. After winning multiple Pavo Cups and Stallion Competitions, the stallion is now successful at Small Tour level.

Next week we have a look at the sires of the jumper foals that were born last year. Interested in more fun facts like these? Visit the Trivia Thursday page!

Are you expecting a foal next year? Or do you intend to breed a foal in the future? We have made an overview of useful tips, frequently asked questions and information about breeding and registration of your foal(s). Curious to see foals of fellow breeders or keen to show off your own foal(s) to other breeders? Become a member of the special Facebook page for KWPN Foals!