The birth of your foal

Whether it's your mare's first foal or het tenth, a newborn foal is a wonder to behold. However, the birth of a foal is also a stressful event, as many things can go wrong. Fortunately, most births go smoothly and, before you know it, you're long-awaited foal will be lying next to its dam. To this end we'll discuss the measures you can take to facilitate your mare's pregnancy and delivery. 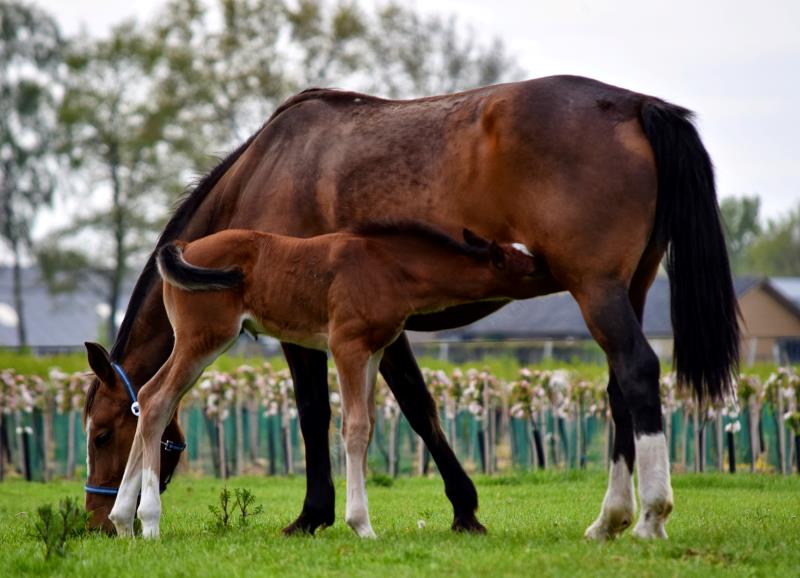 Of course, preparing for the birth of a healthy foal begins with gestation and includes exercise. Although a mare shouldn’t be subjected to strenuous exercise near the end of her pregnancy due to the extra approximately 100 kilos she will be carrying, she should have ample turnout time in pasture or be lightly worked. In addition, a pregnant mare should be kept at her optimum weight. “Not too thin because then she’ll develop nutritional deficiencies, which will adversely affect the foal through her milk. Furthermore, she won’t have any reserves when she starts to foal. With an overweight mare, the extra fat can constrict the birth canal, which is obviously counterproductive to the quick birth of a foal. It tends to be underestimated, but a birth is a real achievement for a mare, and she has to be in top shape for it. Expelling a foal in relatively short time takes a major burst of power and demands a lot of energy.”

A few weeks prior to your mare’s due date she should be moved to a foaling stall, where she can produce antibodies against pathogens present there and then pass the antibodies to her foal through her colostrum. In addition, she can slowly get accustomed to her new surroundings so that she will feel relaxed when she starts foaling. “Obviously, the stall in which the foal will be born should be as clean as possible, so it should be stripped of as many potential bacteria sources as possible. Regarding the latter, foaling outside is always the cleanest, but security there is a tricky business. In any case, a birth alarm is a must. It allows the owner to sleep better and prevents surprises. There are several types of these alarms available, such as sweat bands, a toggle switch and a transmitter on the vulva lips. I’ve used the latter system for several years and apply it to the mare in a timely manner.  This reliable birth alarm is routed to my mobile phone and my partner’s. “The foaling stall on our property is bigger than the regular stalls, which is advisable, certainly if the foal needs assistance; then it’s essential to have space behind the mare. In a large stall, the mare won’t end up lying with her hindquarters against the wall as easily, which hinders foaling. Although if she has the chance, the mare will almost always lie down against a stall wall when she’s delivering the foal to give counter pressure to the rapid contractions. “It’s also important to have enough light. If the stall is lit by only one light bulb, then it’s convenient to have portable lighting on hand. I also always make sure that the stall has good bedding. This prevents the foal from sliding and becoming unnecessarily injured when it takes its first step. Obviously, it’s also preferable not to have a fixed manger or other protruding objects in the stall.”

When Does Birth Begin?

The normal birth of a foal follows a set pattern and consists of three phases, beginning with the preparation phase. “In this first phase, the mare may be a little restless or present colic symptoms, hold her tail high, show sweat on her flanks and/or drip milk. If she normally stands dozing but now is walking circles in her stall or pawing the ground, these things certainly warrant attention. Alarm bells should go off if the mare is acting differently than usual. The previously mentioned visible signs of discomfort in the mare leading up to expulsion are caused by contractions of the uterus or rapid contractions. The first phase lasts one to four hours and ends when the amniotic sac breaks. The amniotic fluid from the amniotic sac also acts as a natural lubricant,”

“The next phase is the second stage; it’s very intense. During the last months of gestation, the foal lies with its back against the bottom of the uterus and with its head towards the exit. In preparation for the birth, the colt turns to the so-called breast-belly position, which requires a 180-degree turn to assume the proper position for birth. Then by stretching the neck, poll and front legs, the foal forms a kind of wedge which stretches the cervix and allows the foal to work its way out. The white-bluish amniotic sac, the feet sac, should be visible in the birth canal five to ten minutes after the membranes rupture, in which one leg often protrudes a few centimeters in front of the other to facilitate passage of the shoulders through the pelvis. In a normal birth, the expulsion phase from start to finish lasts just a half hour.” 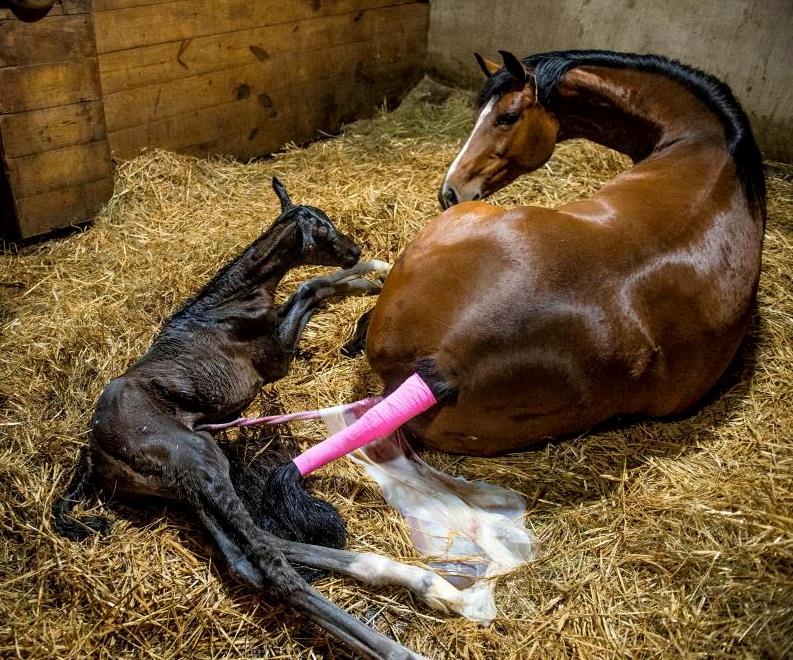 Fortunately, the birth of a foal goes well in 95% of cases, but the remaining 5% require timely intervention! In any case, it is very important to see clear progress in the birthing process. Lenk: “All alarm bells should sound if a mare pushes but nothing comes out. Or if the hind feet come first, or if the front feet come but not the head, or if the [mare’s] anus is bulging! If the birth is not progressing quickly, make the mare stand and walk her around because a mare that’s moving won’t develop intra-abdominal pressure. When birthing starts, always make sure you have a charged mobile phone on hand with your vet’s number. Time remains the most important factor in saving the foal and/or mare during a complicated birth!”

“During the third and final phase of birth, the afterbirth or placenta is expelled. This is coupled with continued uterine contractions in the mare. When the foal nurses, the release of hormones in this process facilitates the release of the afterbirth. This usually happens within an hour. It’s always important to look at the afterbirth closely to make sure it has been completely passed. Occasionally, the afterbirth doesn’t separate from the uterine wall and will hang from the mare. If it hasn’t passed after two hours, it’s wise to call the vet. If the afterbirth still hasn’t passed after six hours, poisonous substances or toxins may be released and cause the mare to develop a fever, laminitis or a severe uterine infection. The latter may become chronic and is a common cause of remaining barren the next breeding season.”

Within two hours of birth, the foal should be standing on its legs and searching for the udder.  “If the foal has enough energy to go searching, things always turn out well. A foal that’s too weak will need to be fed the first colostrum by bottle. You’ll need to clean the mare’s udder and milk her, if necessary. With an older mare that has lots of colostrum, it’s wise to milk her once and then freeze the colostrum. Obviously, you should replace it every year. Never substitute the colostrum of a different animal! It’s better then to present the problem to the vet, who can administer an infusion with antibodies. In fact, a foal is born without any antibodies. In the placenta, which is commonly called ‘afterbirth,’ there’s an exchange that takes place of nutrients, hormones and oxygen (from dam to foal) and waste containing hormones (from foal to dam).  This afterbirth, however, does not let antibodies pass through, so a foal gets its first antibodies through the colostrum.  If the mare hasn’t been vaccinated against tetanus for a long time, the vet can also give the newborn foal a so-called foal injection. This provides the necessary extra protection.” 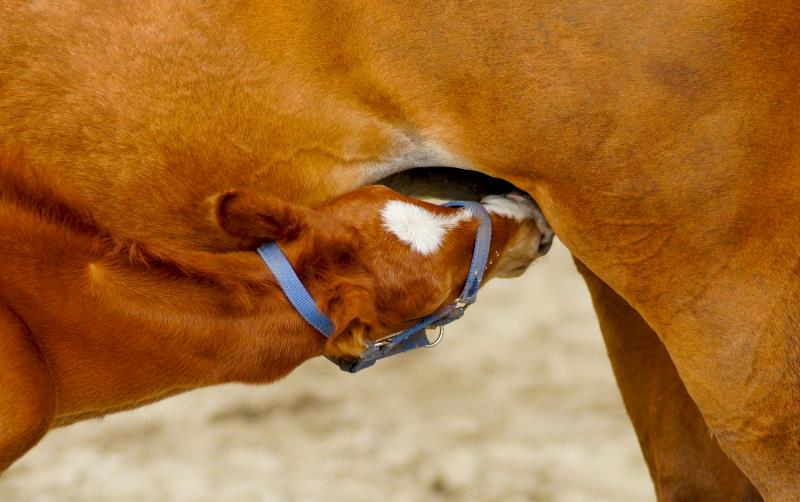