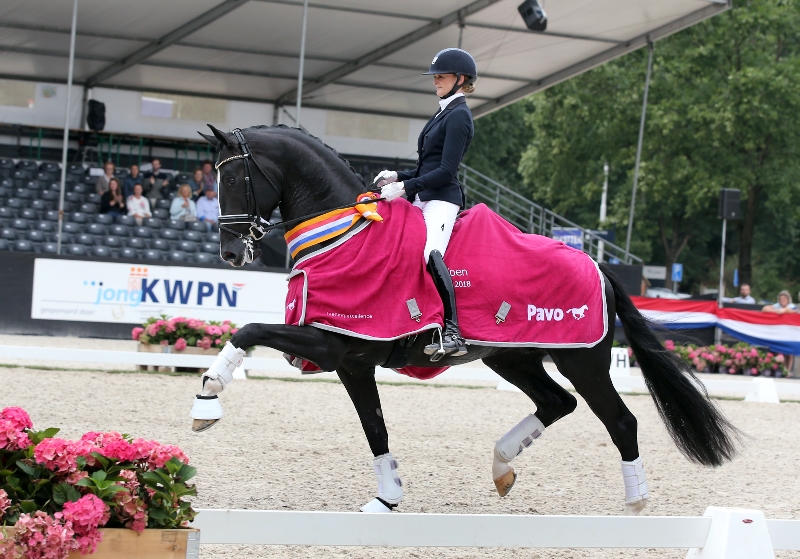 Last week was the third and final selection for the World Championships for Young Dressage Horses, which takes place from August 1 to 4 at the National Equestrian Center in Ermelo the Netherlands. Various KWPN stallions have managed to put themselves in the spotlight. Dinja van Liere and Emmelie Scholtens are both delegated with three horses.

After a long day, the selection committee was able to make the final selection for the WC for Young Dressage Horses, in good harmony and consultation. In the coming period, the focus will mainly be on perfecting the tests. On July 14 there is a final training for the selected combinations and the first reserves.

Six horses were selected in the five-year-old division: champion of the KWPN Stallion Show, winner of the Pavo Cup and winner of the stallion competition Jameson RS2 with Marieke van der Putten and his half-sister Jatilinda with Vai Bruntink. Renate van Uytert - van Vliet has been selected with two horses: the KWPN approved stallion Just Wimphof and Johnny Depp, Emmelie Scholtens will compete with Johnny B. Goode and Jovian, last year’s winner of silver in the Pavo Cup final under Eva Möller, is also delegated, this time with Andreas Helgstrand in the saddle. The first reserve of the five-year-olds is Emmelie Scholtens with Joe.

Six horses are also delegated to the seven-year-old classes. The KWPN-approved Henkie has already done two World Championships and is competing again this year with Adelinde Cornelissen. Silver medalist Hermès and Dinja van Liere are also delegated, and she is also allowed to compete the mare Haute Couture. Mara de Vries and Habibi DVB were also present for the past two years and can have another go this year. Anne Meulendijks and Hot-Spot and Olga Boucher and Houdini la Haya complete the selection. Dinja van Liere has a spare horse in Hartsuijker if one of her other two seven-year-old horses is unable to compete, Quinty Vossers and Hummer are the first reserve in this age class.

Do you already have tickets for the World Championships for Young Dressage Horses? As a KWPN member, you benefit from discounts!