Trivia Thursday: Which dressage stallions have the most Grand Prix offspring? 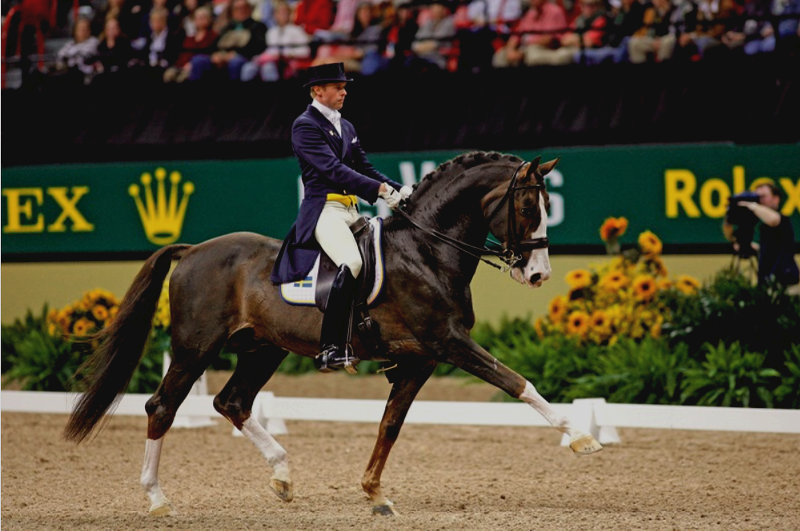 Every year, breeders make stallion choices with the ultimate goal of breeding a Grand Prix horse. But how many KWPN horses went all the way to Grand Prix level and which stallions have produced the most Grand Prix horses? Not only in factual numbers, but also in percentage. We had a look in the KWPN Database in search of these answers.

Jazz in the lead

If we look purely at the numbers, Jazz is well ahead with 118 Grand Prix dressage offspring registered with KWPN. Gribaldi follows in second place with 75, Ferro with 39 in third. Place four is shared by Krack C and Johnson with 38 each, then Flemmingh comes with 30, Painted Black with 24, just like Metall, and Negro follows in seventh place with 23. In eighth is Contango with 21, Welt Hit II is in ninth place with 20 and Tuschinksi, OO Seven and Florencio are together in tenth place with 18 Grand Prix dressage offspring.

Briar in the lead

Idocus comes in fourth with three Grand Prix offspring from 66 KWPN registered foals. As an eleven-year-old he was approved by the KWPN. At that time he was already competing at Grand Prix with the American rider Courtney King. Marlies van Baalen then took over the reins and in 2004 qualified for the Dutch team for the Olympic Games in Athens. His three KWPN registered offspring at Grand Prix level are: Vabiola L (breeder A. van de Goor, Herpen / J. Lamers, Oss), Olivier and Victoria RDP (breeder K. Retera, Nuenen). The latter is competed internationally by Caroline Rijnders. In fifth place we come across a stallion that was also in the aforementioned top 10: Painted Black. From more than 600 KWPN registered foals, he has produced 24 Grand Prix dressage offspring. Including the international horses Zingaro-Apple (breeder: N. van Maaswaal, 't Goy) from Marieke van der Putten, W. Painted Brown (breeder: A.P.M. Pittens, Nistelrode) from Marlies van Baalen, Black Pearl (breeder: J. Strous, Hunsel) from Morgan Barbançon, and so many more.

In sixth place comes another stallion who has given three Grand Prix offspring. The KWPN recognized stallion Welcome, was produced in the Grand Prix by Isabel Werth and they won several Grand Prix's. Welcome’s three Grand Prix offspring are: Ulixes (breeder Comb. Bleeker, Nijverdal), Untouchable (breeder A. C. Dijkman, 's-Heerenberg) and Winnetou D.D.H. (breeder C. Kamphof, Pesse). Jazz follows in seventh place, 3.74% of his offspring reached the Grand Prix. D-Day follows in eighth place with six Grand Prix dressage offspring from 171 KWPN registered foals. At the age of seven he was approved by the KWPN and he covered for only a few years. His Grand Prix daughter Paso Doble (breeder: H.W. Janssen, Meijel) achieved fifth place as a young horse in the Pavo Cup final.

Are you expecting your (first) foal soon, or is it already on the ground but not registered yet? Maybe you are planning on breeding in the future? We have listed a few things about this. More information about registering your foal (s), with the all in foal registration you can register your foal online. We now also offer a discount on applying for the D-OC predicate from your foal.