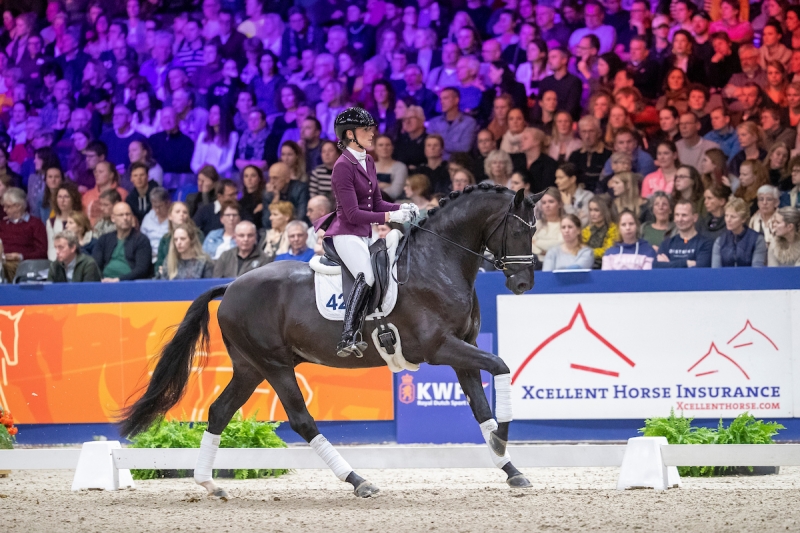 The addition of Lowlands represents a long search for a young stallion with the right mix of athleticism, pedigree, temperament, and soundness for sport and breeding. At his testing, the KWPN praised the black stallion for his reliability, concentration under saddle and willingness to work.

“We are thrilled to have Lowlands join the Iron Spring Farm family,” says Meghan de Garay, breeding manager at Iron Spring Farm. “He’s a beautiful, rideable stallion with wonderful bloodlines. He has a lot of German blood, which means he can play an important role in Dutch breeding as a blood freshener because he is completely free of Jazz, Ferro and Flemmingh.”

Lowlands had an impressive KWPN stallion testing, scoring no lower than 8.5 in any category, with a total of 87.5. Highlights included 9.5 on the walk, 8.5 on trot, canter, elasticity and balance and a 9 on rideability and attitude. Lowlands is by Millennium, an extraordinary sire of 63 Licensed sons, including many stallion test champions. Millennium successfully debuted in the small tour classes in 2019 and represents famous athletic dressage lines as a grandson of Gribaldi, Preferent.

The mother line of Lowlands’ pedigree is equally impressive. His dam, La Donna S, is a daughter of the Grand Prix stallion Donnerball. La Donna S is an Elite States Premium mare and was selected for the prestigious Brilliantring at the Oldenburg Elite Mare Show in Rastede. In addition to Lowlands, she has produced two Licensed sons, a daughter competing at Prix St. Georges and an Elite foal. Lowland's grandmother, Lucy (by Landadel), is the dam of three States Premium mares, the Grand Prix dressage horse Nora ridden by Christa Larmoyeur and a Z2 dressage horse. Lucy is also a half-sister of the Grand Prix dressage horse Exquis Escapado, ridden by Carl Hester and Hans-Peter Minderhoud. Lowlands was bred by Bernhard Schrapper in Germany.

Lowlands will remain in the Netherlands for breeding and training with Dinja van Liere. The Dutch rider has successfully competed numerous horses in the World Young Horse Championships, as well as in CDI Grand Prix. Lowlands was purchased through Reesink Horses.