Breeders in the picture: Henk and Joke van den Bosch

This year, at the KWPN Stallion Show, the first breeder premiums were given by the Friends of the KWPN. The premiums were awarded to breeders of horses who managed to place themselves in the top 3 of the WBFSH-ranking in the past year: Explosion W for the show jumpers and Bayro for the eventing horses. Ms van den Bosch received the premium for eventing topper Bayro.

A token of appreciation for the KWPN breeders and mutual networking, that is what the Friends of the KWPN stand for. They have made it possible for the breeder premiums to be reduced this year. But which breeders have received a breeder’s premium, what do they think about this initiative and what have they done with the amount that they received?

With Tim Lips, Bayro achieved a second place in the WBFSH-ranking of eventing horses with his sports performances in 2019. Bayro was bred by Mr. Henk van den Bosch from Best. Given his death in 2017, his wife - Joke - was invited to visit the KWPN Stallion Show to receive the breeder's premium there. Unfortunately, she was unable to attend. That is why we visited her and her daughter Sylvia in the first week of February to hand over the breeder's premium.

A dream for every breeder 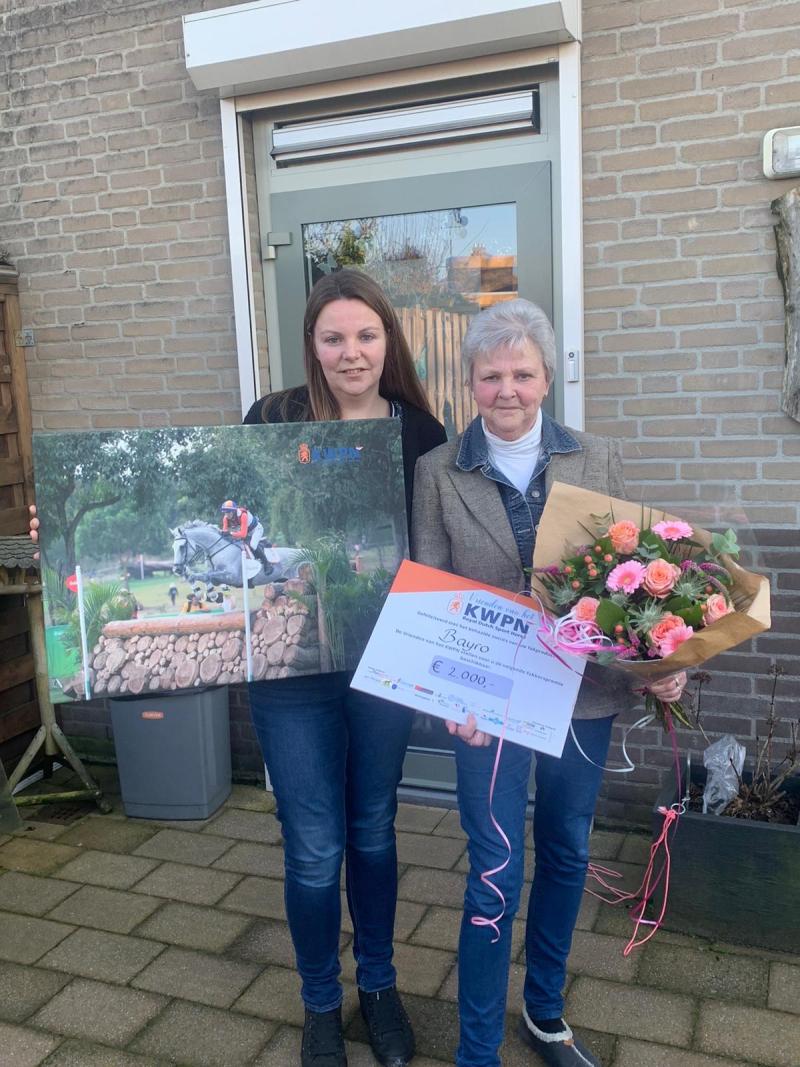 Joke van den Bosch is pleasantly surprised with the receipt of this breeder premium. “It is a great initiative and an appreciation for the breeders. For my husband, this would have been a crowning achievement and an incentive to try to continue this bloodline and hopefully breed another beautiful horse with the same traits as Bayro.” Bayro was a dream come true for her husband, says Joke. “My husband already knew that the bloodline was good, but it remains to be seen how the foal will develop. He hoped it would be a horse with both jumping and dressage qualities, but that Bayro has achieved so much with Tim Lips is a dream for every breeder. Henk was very proud of Bayro and followed his performance closely.”

Pony for granddaughter
During the visit, Ms Van den Bosch indicated what she and Sylvia wanted to invest the money in: the purchase of a suitable pony for granddaughter Brenda Fay. And she kept her word. “The money from the check indeed went to a pony for my ten-year-old granddaughter. She recently acquired an E-pony, of which she is very proud and with which she now receives private lessons. Branda Fay hopes to get to the event sport at the highest possible level and achieve good results there.”

Death of Bayro
Sunday, March 29, it was announced that eventing topper Bayro has passed away. The 14-year-old Casantos son died of colic. The combination of Lips and Bayro has been the best and most successful combination of TeamNL in international event sport in recent years. Joke also received this sad news. “It is of course terrible that such a great horse dies in the prime of its life. He could have been at the top for many years, but unfortunately this turned out differently. We wish Tim Lips and the caretakers of Bayro a lot of strength with the loss.”