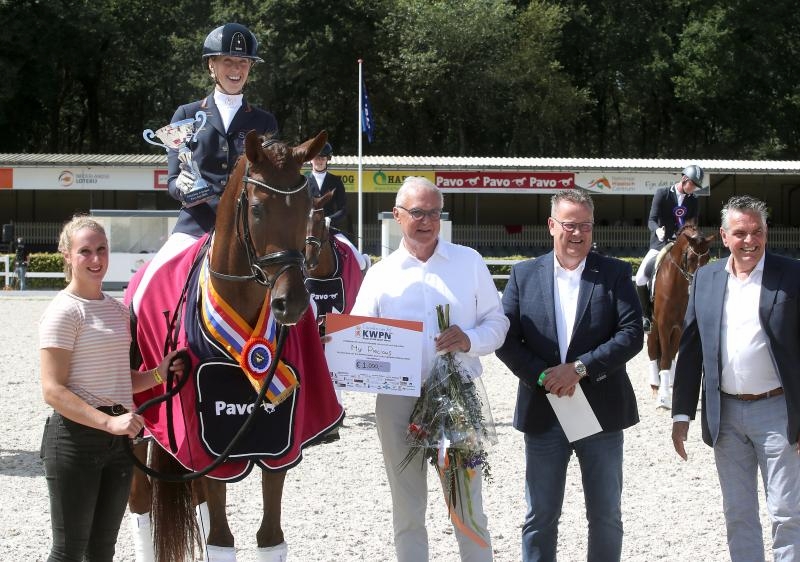 The chestnut mare My Precious wo the semi-final and held onto the lead until the end. Presented by Kirsten Brouwer, she squeeked by Dinja van Liere and the KWPN-approved stallion McLaren after the ride of the guest judge.

Thursday, My Precious (Ferguson out of Cinderella Platinum elite EPTM-dres PROK by Vivaldi, bred by Titan Wilaras of Riel) already received 90.2 points in the semi-final. Today she added another 90 points in the first part of the final. Guest rider Philipp Hess awarded the mare a 9.5. “The highlight of this mare is the walk, it is spacious, pure and with great body use. She receives a 9.6 for it,” says Mariëtte Sanders enthusiastically, who judged the horses together with Christoph Hess and Bart Bax. “This is a true dressage horse. She keeps on swinging in the trot and the canter is powerful.”

McLaren (Morricone out of Samatha by Sir Donnerhall, bred by U.Toenjes out of Ganderkesee) was in close pursuit on place two. This stallion was in the second position after the first part of the final but received the ultimate 10 from Philipp. “I had a fantastic feeling, you may be proud of such a horse,” he explained his top score. “I envy the rider that may ride and train this horse every day.” The judge panel granted the stallion 88.8 points in the first phase.

The top three was completed by Habanna-daughter Mayflower (out of Galant aster IBOP-dres sport-dres PROK by Alexandro P, bred by Dressage stable Rutten of Ittervoort). In the first part she received 87,6 points and Philipp gave her a 9,0. “The feeling in the walk and canter was really good. In trot she improved in the time I was riding her, so that’s very positive.”

Mister Maserati (GLOCK’s Toto Jr. out of Fille de Reine B elite sport-dres IBOP-dres PROK by Jazz, bred by comb. Bleeker of Nijverdal) moved to the fourth place with Diederik van Silfhout. Followed by In Style-offspring My 7th Sunday (out of G-Daula ster by Cadans M, bred by Joop van Uytert and Renate van Uytert-van Vliet of Heerewaarden) and Febe Zwambagt. My 7th Sunday was also crowned best gelding.