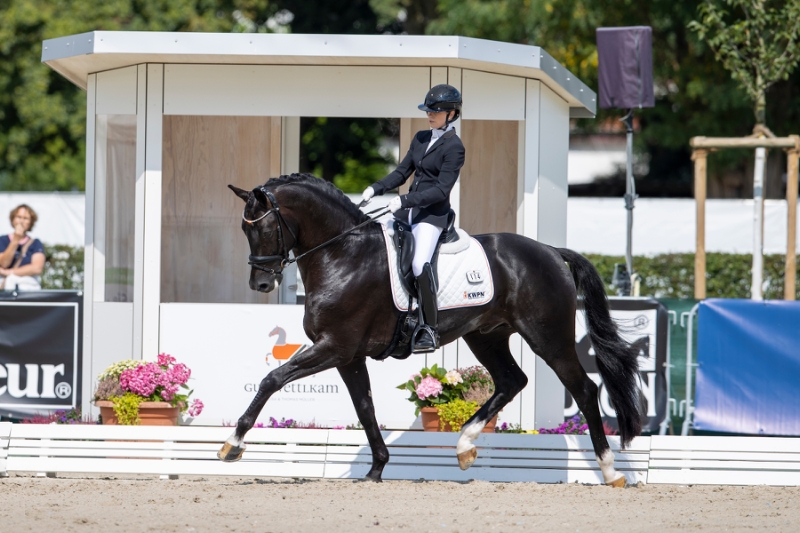 On the first day of the World Breeding Dressage Championships for Young Horses in Verden, Kjento did what he came for: win! Ridden by Charlotte Fry he showed an excellent test that was rewarded with a score of 9.40, tens for his trot and canter.

Coincidentally, Kjento and his most formidable opponent, the much-talked-about Rheinlander stallion Escamillo, made their appearance right after each other. Escamillo showed why he already won so much at his six years of age. Presented by the Spanish rider Manuel Daniquez Bernal, the son of Escolar received high points all around and yielded a total of 9.20. Fry knew she had her work cut out for her. However, as a king the pitch-black Kjento (Negro out of Zoriana elite IBOP-dr pref prest PROK, bred by A.J. van Os from Sprang-Capelle) moved through the ring. Beautifully uphill, with a powerful hind leg, lots of impression, balanced and carried. The stallion is also far in his education, as shown by the flawless changes, expressive half-passes and neat rein back, all rewarded in the submission grade. Only the walk lingered at an 8, but with two tens and two 9.5s, the KWPN-stallion demonstrated his skills and heads for the final as tipped favourite.

Another two in the final

Two other KWPN-horses qualified for the final directly. Thalia Rockx was aboard Koko Jr De La Fazenda, a son of Toto Jr (out of Gerda Nova Elite sport-dr by Romanov) that was bred by her father. The bay shows a big, swinging trot and a lovely walk. The canter could display more stillness, but the changes were good. Obtaining two 8.8s for trot and walk brought the total to 8.34, enough for the seventh position in this preliminary round.

Jeanine Nieuwenhuis also steered King van het Haarbosch straight tot he finals. King seemed to be slightly bothered by the heavy wind and was therefore somewhat tense, but with his beautifully carried trot, that received an 8.8 from the jury, and furthermore eights and an 8.2 for overall impression, the pair ended on the shared twelfth position and may come back this Saturday.

Kind Pleasure under Femke de Laat and Keano RS2 with Marieke van der Putten both came up a little short to reach the final directly, scoring 8.04 and 8.02 respectively. Kind Pleasure (Governor out of Famora elite sport-dr PROK by Blue Hors Zack, bred by W.L. Plaizier) moved with a lovely, sympathetic frame, but seems a little green at this level. This was shown in the changes and the carriage in the canter. His expressive trot was highly marked with an 8.5, as was his general impression. They placed fifteenth.

Keanu RS2 (Governor out of AJ Wendy, ster pref prest IBOP-dr by Krack C of breeder P.J.N. Smit) caught everyone’s eye the moment he entered the ring with his mighty silhouette. However, at x the stallion had to think twice if he wanted to continue his test; he was very impressed by his surroundings. This led to a test full of highlights, for example the shoulder in, medium trot and extended canter, but also to a tense walk, which is always harshly punished at the world championships. A 9 for the trot, an 8.7 for the canter, but also a 7 for the walk and a 6.9 for the submission, Marieke had to settle for the seventeenth position. However, if the stallion is a little better in rideability tomorrow, a place in the final seems attainable. The jury certainly has faith in his future, because they rewarded him with an 8.5 for general impression.

Hans Peter Minderhoud rode the by R. De Lange Sr. Bred GLOCK’s Kardam’s Whisper to a score of 7.7. The test was appealing and the charming son of (another!) Glock’s Toto Jr (out of Whisper elite EPTM PROK by Sir Sinclair) received 8s for all three expressive gaits, the submission lingered at 6.7, probably because of the restless contact. This also brought down the general impression to a 7.8. Tomorrow in the small final, these combinations get a chance to redeem themselves and battle for the last three spots in the final.