Bidding started on the collection of three and four year olds! 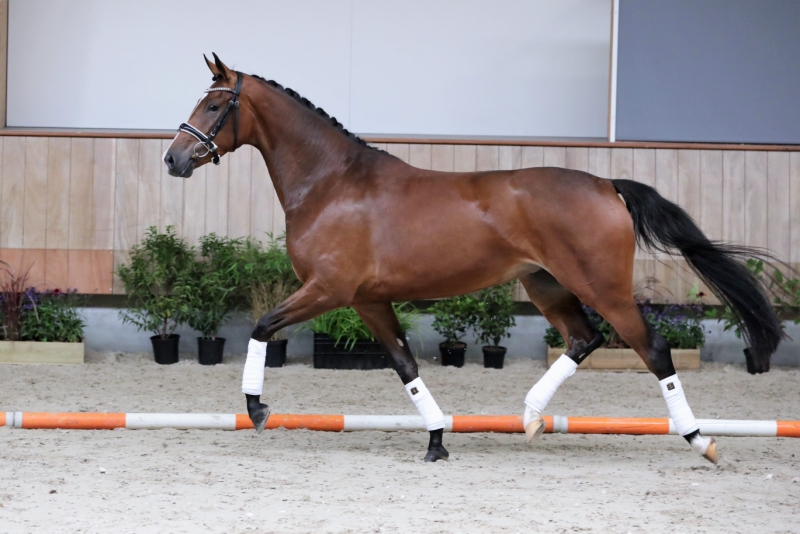 Last Tuesday, the fifteen three- and four-year-old dressage and jumping horses were presented on the KWPN auction platform. From now on you can bid on these talented young horses.

Did you know that two mares in foal are also part of the collection? Just Wimphof daughter Narona is expecting a foal in 2022 by Nirvano, a son of For Ferrero, which was selected for Performance test last year. Narona herself comes from a damline full of sport. Her elite dam Tolinda (s.Jazz) produced the ZZ-Zwaar horse Camel (by Uphill). She is also a half sister of the Danish Small Tour horse Vanity (by Krack C). The international Grand Prix dressage horse Lawool (by Zeolit) also comes from this dam line.

One jumping mare in foal
The second mare in foal is Quabri de L'Isle daughter Nina ES. Her pedigree is very interesting, with the exceptionally breeding Grand Prix stallion Chacco-Blue as grandsire. He is one of the world's best breeding stallions with offspring such as Explosion W, Blue Movie, Chaqui Z and Chanyon. This damline goes back to the 1.40m jumping mare Uma. Last winter a Quabri de L'Isle son from Uma was Selected for the KWPN Performance test. Nina ES is in foal to the 1.50m stallion Candy de Nantuell.

Lady Reveil line
The genetically very interesting stallion Governor is competing with Adelinde Cornelissen at Grand Prix level and proves to be a strong inheriter with approved sons such as Koning, Kayne, Lloyd, Neil and champion stallion Kremlin MD. Night Mare is bred out of the mare Esorenta Bo, who combines the international sport and breeding stallions Sorento and Gribaldi in her pedigree. Numerous sport horses are coming from Lady Reveil line, just as Night Mare and also  including the Grand Prix stallion Hexagon's Ich Weiss (by Rubiquil).

85 points for trot
And how about the well-moving Nensie (by Ebony)? At the inspection this summer she received the Ster predicate with 85 points for her trot. This Provisional Keur mare is bred out of the ZZ-Licht classified mare Rhapsody, who is a full sister of the KWPN-approved stallion Son de Niro. Granddam Ledensie is a half sister to the international Grand Prix dressage horse Bolero (s.Johnson) ridden by Morgan Barbançon.

The stallion Impression already made a promising international Small Tour debut under Diederik van Silfhout last spring and is now being prepared for the big classes. His daughter Noorgina has the same grandmother as the international Grand Prix dressage horse Aswin (s.Sandreo). In addition her dam Georgina is a half sister of, among others, the Small Tour horses Webster (by Rhodium) and Digo (by Johnson).

Bidding started
Bidding is now possible. The auction closes on Monday evening, September 6 from 8 p.m. Do you have any questions or do you want to know more about the auction horses? Our sales team will be happy to talk to you about these talented horses. You can contact Wim Versteeg via +31 6 54 20 18 00 or via sales@kwpn.nl.