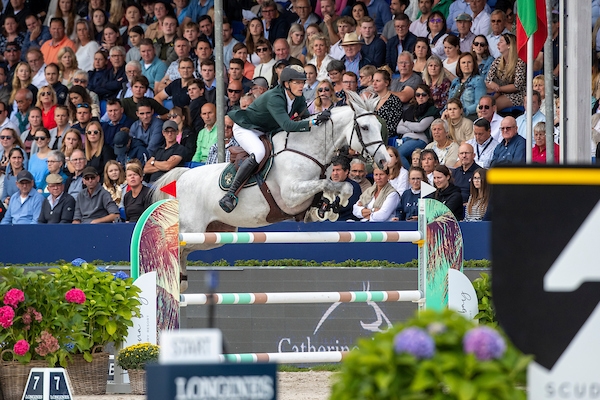 What a beautiful conclusion to the WC young jumper horses. The Zirocco Blue VDL-daughter Just A Dream won gold in the seven-year-old class, while J.Comghorla van Beek took silver.

The seven-year-olds were challenged by a technical 1.45m course in which the time limit was also sharp. This resulted in merely four clear combinations, immediately ensuring the KWPN of a medal since two of those four horses in the jump-off were registered at the KWPN as a foal.

The result became a memorable one: Harm Lahde and the eager Zirocco Blue VDL-daughter Just A Dream sport-spr (out of Sweet Dream by Carano, bred by late José Nooren) soared thanks to a strong clear round to the coveted gold medal in the most prestigious championship this WC. It is most likely the last winning ride for this duo, that has obtained numerous successes the past year. After 8 years of employment, Harm Lahde is terminating his position at Just A Dream’s owner Gestüt Eichenhain. “The owner bought Just A Dream as six-year-old at Jelmer Hoekstra and she is a true winner. She is at her best when we give it our all, so once I reached the jump-off, I knew we had to go flat out”, says the rider. As the last start in the jump-off Gilles Thomas also gave it a shot aboard his quick, careful Comme Il Faut-daughter J.Comghorla van Beek (out of Gorla ster by Padinus) of breeder Guido Herijgers. They form a combination for only ten days, making this accomplishment all the more promising.