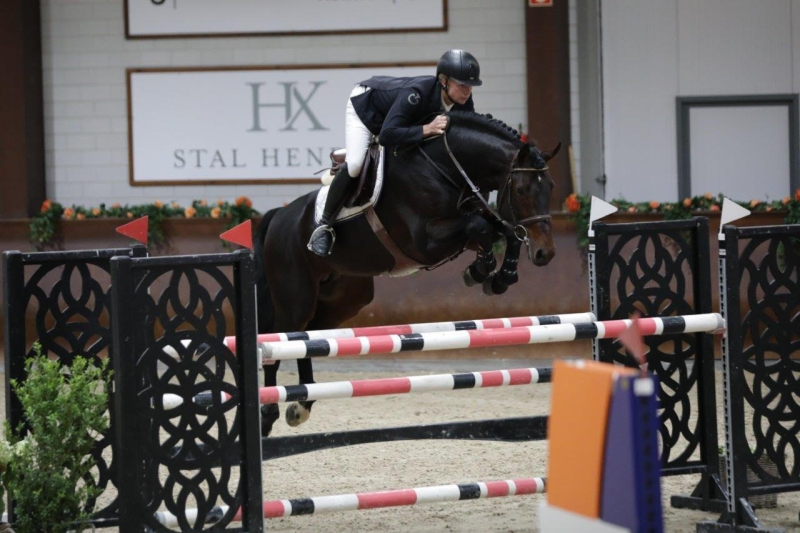 With ten out of 15 entries to qualify for the jump-off, it was a hard-fought win for Kallas ridden by Dennis van den Brink in this first stallion competition leg of the season.

At the Peelbergen Equestrian Centre in Kronenberg the Blom Stallion Competition started of with the Z/ZZ class. For most stallions, the basis course formed no difficulty, and this resulted in a jump-off with ten combinations, including four KWPN-approved stallions. Dennis van den Brink quickly steered his cooperative and careful Kallas (Dallas VDL out of Fadessa H2 elite IBOP-spr PROK by Quality Time, bred by A.F.W. Holkenborg of Haaksbergen) through the course and seized the first win. “In the jump-off Kallas was eager to do his job, as per usual”, smiles the rider. “Immediately on the first vertical I got a nice forward distance, followed by a quick turn and then we got in the flow. Kallas has no flaws, he is so level-headed, and it makes no difference to him which arena I enter him. Each year he develops in a positive fashion and I think it will take another two years for his true colours to come out. I feel that Kallas has a lot of potential, so it is great to kick this stallion competition season off with a win”, comments Van den Brink.

The at ZZ-level jumping Catch Twenty Two VO Z (s.Catoki) jumped to the second price with Demi Dijks, followed by the fast Kwitoulon van de Laarse Heide (Toulon out of Kwidanta keur sport-spr prest by Quidam de Revel, bred and owned by Cees Zandbergen) and Nikita Cheung in third. As last to start, Wolfgang Zimmermann made a solid attempt with the well-jumping Cornet Obolensky-offspring Kannan Jr (out of Van Meta ster sport-spr PROK by Quick Star, bred and owned by the Kramer family of Oud-beierland and Sjaak van der Lei) and their time was rewarded with the fourth position.