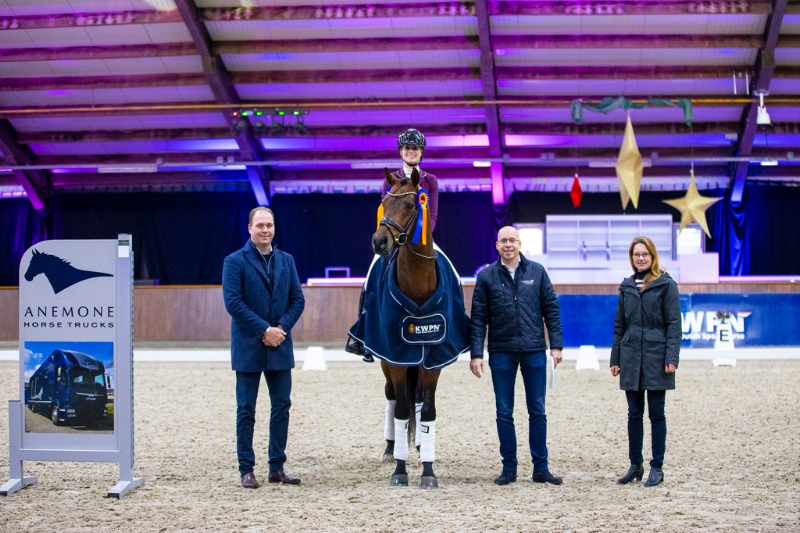 Veronique Roerink and Monique Peutz formed the jury for the L-class.

The NRPS-stallion Gorgeous Black Art (s.GLOCK’s Toto Jr., bred by K. Visser of Alteveer, owned by Stal Hexagon of Schore) scored a lovely 85 points. “The trot shows lots of technique and balance,” describes Monique. An 8.5 for trot. The walk resulted in an 8 and the canter in an 8.5. A 9 for submission and 8,5 for overall impression completed the list.

Dinja van Liere was the first to enter the arena in the four-year-old age class, saddling her Mauro Turfhorst (Zonik out of Hidaylia ster by Negrom, bred by J.W. Greve of Haaksbergen, registered to Stoeterij Turfhorst BV in Wezep and Reesink Horses in Eibergen) in the L-class. The stallion immediately set the bar high as he scored 85 points. And as it turned out, no one could compete with that score except for Dinja herself. As a general remark, the jury noted: “Lovely, elegant performance, what an attractive commination”. About the trot, the jury commented “The trot is very light-footed and already shows abundant balance.” The stallion scored an 8.5 for this gait. “The walk is pure and with an athletic use of the body”, Monique continues. It was awarded a 9. The canter shows a good jump according to the jury but could cover more ground at times. Mauro Turfhorst received an 8 for it. The submission and overall impression of the stallion were valued at an 8.5.

It was once again McLaren (Morricone out of Samantha by Sir Donnerhall, bred by U. Toenjes of Ganderkesee and registered to Reesink Horses of Eibergen) that secured the victory. The jury started off by complimenting Dinja van Liere. Monique praised: “This is how we like to see young horses being presented, by everyone. Nice length, self-going and ridden off the hand. It is a pleasure to watch.” Unsurprisingly, the duo scored a 9.5 for submission. The trot was found to be extremely elegant, with a lovely front leg, a 9. “In the walk he could cover more ground and show more suppleness”, said the jury, an 8. The canter was granted an 8.5, and the overall impression a 9.