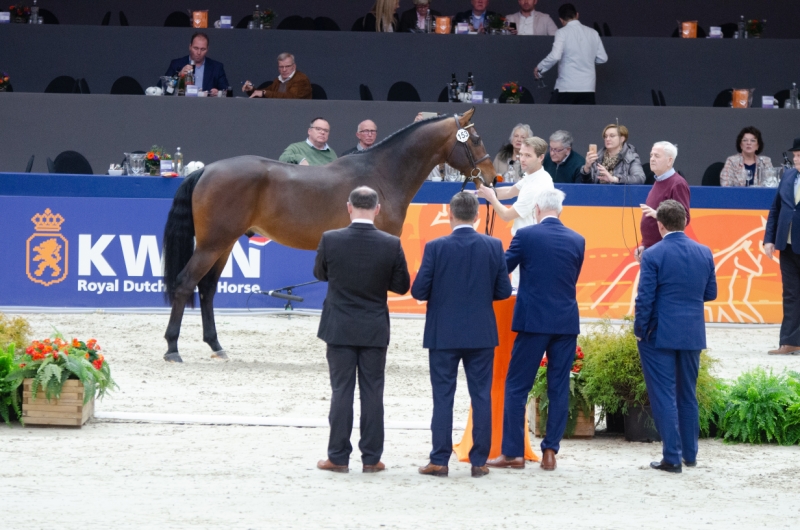 This week’s subject: Damlines and heights.

WHY:
The sport demands large horses, certainly in dressage, and breeders prefer large stallions. The height of the average sport horse is approximately 1.64m. A two-and-half-year-old stallion will obviously grow another few centimetres, so talented stallions which measure 1.62m or 1.63m may be advanced to the second round viewing; however, they must be convincing in ‘s-Hertogenbosch to advance again.

WHEN:
At the first round viewing, although the dam-line may only be considered an asset at that point. However, it is a fixed criterion in the second-round viewing. This means that, based on his damline, a stallion with very interesting bloodlines but whose performance is “ordinary” may still be advanced to the second round viewing in ‘s-Hertogenbosch. If he then gives the same jumping/ free-movement performance as in Ermelo, he is dismissed. However, if he performs better in ‘s-Hertogenbosch, the selection committee will consider him for further advancement. Because every damline is created, an extremely talented stallion out of a weaker damline may still be invited to the performance test. However, to be approved, such a stallion must show convincing natural talent and earn high scores.

WHY:
The goal is to evaluate stallions from proven sport horse lines. Especially with respect to the immediate dams, in the performance test, as doing so increases the chance that these stallions will also produce sport horses. By gathering data on three or four generations of dams, we obtain ample information about the heritability and quality of the line as well as the specific dam. For example, we can learn whether the dam, granddam or great-granddam has produced sufficient sport horses which compete or have competed in at least Z-level dressage or 1.30m-level in show jumping. In addition to sport horse offspring, we can learn if a dam was a sport horse herself and the level at which she competed. Obviously, it also makes a difference whether a mare competed at the Z2 level or Grand Prix.

Likewise, predicates in the damline are also very important. For instance, the Preferent and Prestatie predicates indicate that a mare passes on positive traits to her offspring, as evidenced by their good performance in our inspection system (Preferent) or in the sport (Prestatie). When evaluating the damline, we look closely at the number of offspring produced: if there are no or few offspring, a stallion obviously cannot receive a negative evaluation on that. We also consider other information about the damline. Let’s say that behind a stallion who measures 1.67m in height, are four mares who measure 1.60m. In such case, a stallion is not immediately dismissed; however, the relevant selection committee considers the fact that the damline obviously does not include very tall horses.

Next week this article will be continued. We will take a closer look into the evaluation of the stallion’s mother.