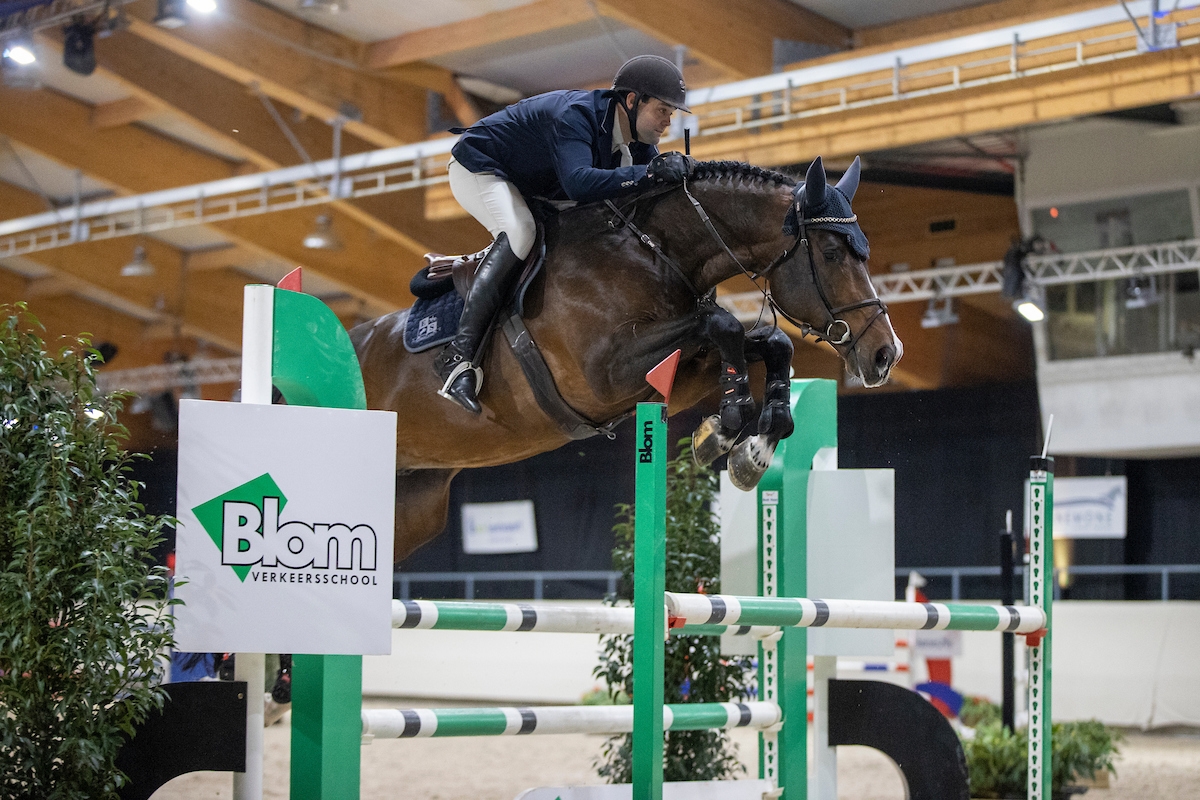 Twelve stallions competed in the final for the Blom Stallion Competition in the M-class. Seven remained clear. The best odds were for Love Connects by Megan Laseur, they claimed the day prize. The competition was won by La Costa ES.

It was the night of Egbert Schep, his homebred horses won both the winner of the Blom Stallion Competition in the L- and M-class. Ridden by Gerd Jan Horsmans the willing Mosito van het Hellehof-son La Costa ES (out of Isolde ES elite sport-spr PROK by Cumano) kept zero faults result in both the basis course and the jump-off. “This is always a fantastic experience. You produce such a stallion from his third year onwards and it’s wonderful if it all comes together on a night like this”, tells Gerd Jan Horsmans excitedly. “His attitude is fantastic, he always wants to go to the oteher side, is careful and always on board. I think he is very intelligent.” According to Gerd Jan Horsmans it is no coincidence. “I ride his dam as well; she is 9 years old and jumps at 1.35m level. She is also incredibly eager, always draws towards the fence. It’s fun to ride both horses. It was exciting tonight; we have all worked very hard towards this the past few months and I was keen on winning the final. Pieter Keunen and Lambada Shake were breathing down our necks, it was a good battle.”

The day prize was won by Megan Laseur and former KSS-horse Love Connects (Connect out of Hello Twiggy BB elite IBOP-spr sport-spr D-OC by Quality Time, bred by W.Chr. Braatbrummelkamp of Wenum Wiesel and registered to Plijnaar Vastgoed BV), but because they missed the first leg of the competition they were out of the race for the overall title. The second place in the competition was won by Pieter Keunen and Lambada Shake (Aganix du Seigneur out of Grappa AG by Spartacus, bred by Alex Gisbert) of Stal Hendrix. They unfortunately incurred one down in the jump-off. The third place was obtained by Lord of Farming HS (Balou du Rouet Z out of Doutzen stb by Clinton, bred by Gebr. Bosch of Luttenberg and registered to J. Schuttert of Ommen) and Caroline Muller, in fourth was Lingo van de Watermolen (Connect out of Happy Wiggy stb by Carambole) of breeder Jan Greve with Steven Veldhuis and fifth was Liverpool (Tangelo van de Zuuthoeve out of Dauphine keur pref IBOP-spr by Lux, bred by B. Derksen of Steenderen and registered to De Radstake in Varsseveld) with Robert Puck.