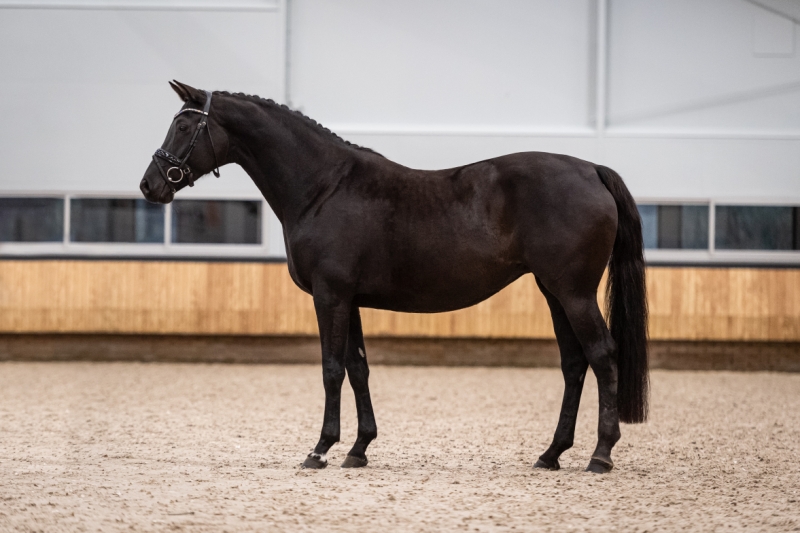 From the 11th to 14th February, the fifth edition of the KWPN Broodmare & Embryo Auction offers great opportunities to invest in the future. The collection consists of nine jumping and eleven dressage broodmares, all of whom are in foal for this season, and three interestingly bred embryos. By purchasing one of these mares or embryos, breeders can get off to a flying start this breeding season.

The KWPN Broodmare & Embryo Auction offers the best Dutch genes and every collection gets great interest from  home and abroad. This collection includes very valuable breeding mares and embryos, which breeders can use to make a significant step forward.

Half-sister of World Champion Kjento
Something special is for example the mare Habiana V.O.D., who is in foal of Desperado. She is a half-sister of the KWPN approved stallion Kjento (v.Negro), who won gold at the WC in Verden in 2021, the approved stallion Mowgli V.O.D. (s.Desperado) as well as the Dutch champion mares Heliana V.O.D. (s.Davino V.O.D.) and Niana V.O.D. (s.Desperado). Also for sale is the Bordeaux mare Farah, who has competed up to fifth (ZZ-Licht) level, represents a solid damline and is in foal of the Small Tour stallion In Style. Another highlight is the five-year-old Miss Ebria L. In her pedigree we find the well-producing international Small Tour stallion Geniaal combined with a half-sister of the international Grand Prix dressage stallion Blue Hors Don Olymbrio. And what to think of the Ferdinand mare Larieta Texel. This mare is a half-sister of the Intermediair II horse High-Five Texel (s.Sorento) and represents a first-class damline as well.

Olympic family members
This auction also offers great opportunities for jumping breeders. The Zirocco Blue VDL mare Elinn was bred out of a half-sister of the Grand Prix showjumpers Dolinn (Harrie Smolders) and Terrific (John Anderson). She is well-tested, performed at 1.30m level and brings in the valuable genes of Heartbreaker and Lux on the dam’s side. Elinn is in foal of the promising Aganix du Seigneur son Lambada Shake AG. The Heathrow mare Lassina was bred out of a half-sister of Vincent Voorn’s successful Olympic showjumper Alpapillon Armani. Another promising mare is the four-years-old N Haylord, a daughter of the former world’s number one Halifax van het Kluizebos out of a proven Holstein damline. A proven broodmare is the Vaillant daughter Cinderella B, who already foaled international performing offspring and is in foal of the Grand Prix stallion Aristoteles V.

Exclusive embryos
Until the 14th of February, bids can be placed online for three special embryos as well. In this auction is offered a Comme Il Faut embryo out of the valuable Darco mare Gamine de la Pomme. Granddam Duchesse de la Pomme has competed on international 1.50m level and already foaled three international showjumpers including two 1.60m level performers. Another great opportunity is created by the Chacco-Blue embryo out of the international 1.35m level competing mare Go Dence, who represents a successful damline. For the dressage breeders, an embryo out of the genetically very valuable Small Tour mare Dendy is the one not to miss. Granddam Endy proved her value in breeding as she foaled, among others, the international Grand Prix dressage horse Broere Karmijn (s.Damiro) of Kirsten Beckers, Dutch mare champion Andy (s.Jazz) and the Small Tour horse Zendy (s.Jazz).

More information
The collection can now be found at www.kwpn.auction. After registering on our website, biddings are possible from Friday the 11th of February until Monday the 14th of February. On the last day, the biddings will close from 8PM CET. We are happy to provide you with more information about the collection. In addition, our sponsor Horses2Fly, can take care of the transport of your foal. For any questions you can contact the KWPN inspector Wim Versteeg on +31(0)6 54 20 18 00 or Mairin van der Tol via salespromotion@kwpn.nl or +31(0)341-255 511.