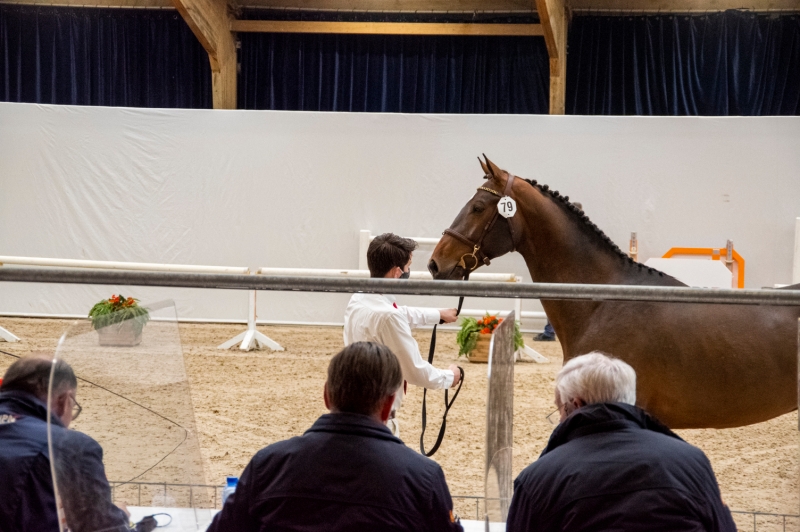 Two jumper stallions and one dressage stallion were presented in the after- and attestation inspection in Ermelo this morning. The Chacco Blue-son Teyssier vd Heffinck received the green light for the performance test.

At the attestation inspection, the stallions that could not partake in the first or second round viewing due to various circumstances are presented. Today, Teyssier van de Heffinck (Chacco Blue out of Maquinn vd Heffinck by Quinn van de Heffinck, bred by Van de Heffinck BVBA of Evergem) was appointed to the performance test. This stallion is registered in the name of De Havikerwaard Stud in De Steeg.

Chairman Cor Loeffen: “It is a long-lined stallion, a very athletically built horse. He has a correct foundation and good topline. He showed a solid performance in free jumping. He was slightly fresh in the arena, but he jumped with great technique and was very eager. He originates from an interesting Oldenburger damline, of which four generations have been active in sport, at 1.30m, 1.50m, 1.40m and 1.50m level, respectively.” The granddam Isolde van de Heffinck (Contact van de Heffinck x Orlando) is successful in the 1.50m classes with Thibeau Spits.

In today’s attestation inspection two more stallions were presented, one jumper and one dressage bred stallion. These horses did not advance to the performance test.