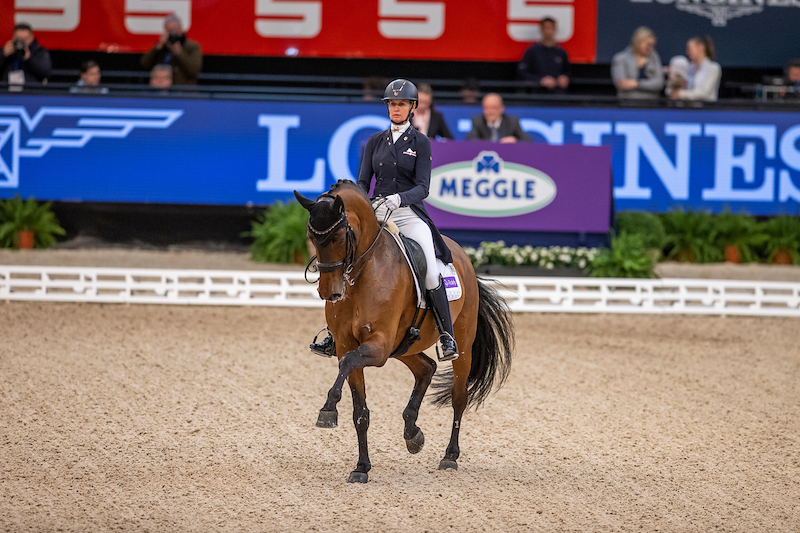 This weekend Leipzig forms the backdrop of the world cups dressage, jumping and driving. Tonight, the second final dressage was ridden, the Freestyle to Music and three KWPN-horses made their appearance. Yvonne Losos de Muniz claimed the tenth position aboard Aquamarijn (s.United). Under the watchful eye of an enthusiastic crowd it was, to no-one’s surprise, Jessica von Bredow-Werndl and her Trakhener-mare TSF Dalera BB (s.Easy Game) that won the Freestyle and thereby also secured gold in de world cup.

Yessin Rahmouni, representing the Moroccan colours, was one of the first riders to enter the ring. The impressive KWPN-recognized All at Once (Ampère out of Wynona RB elite prest IBOP-dres sport-dres D-OC by Gribaldi, bred by Stal 104 in Wijdewormer) danced to 73.679% in his freestyle. No personal best, but certainly a score to be proud of. After two years of absence, the crowd was visibly and audibly excited and the rider happily accepted the big applause.

The interaction with the audience must have been heartwarming for the riders, but also caused some difficulties for the horses. The still young combinations have had little opportunity to gain experience the last two years, but even the more seasoned horses showed a little tension here and there. That was also the case for Dark Legend (Zucchero out of Zoë keur IBOP-dres by Tango, bred by family Nobus-de Potter). The elegant gelding already showed some resistance outside the ring and some hitches followed at the start of the test. Charlotte Fry solved this in a quick and clever way and could resume her test. It was a freestyle with some lovely parts, but overall, the tension put a strain on the scores. A final score of 67,55% meant the duo could no longer play any role of importance today. It was the first world cup final for Charlotte Fry and the sympathetic rider still waved and smiled to the crowd as she left the ring.

Yvonne Losos de Muniz saddled her appealing mare Aquamarijn (United out of Toermalijn ster pref prest by Gribaldi, bred by P.A.M. van Kessel of Vorstenbosch). Immediately on the first line you noticed the elegant front leg of the bay mare and the Dominican rider guided her mare through a lovely test. The total score was 75,386%, in which the jury discrepancies (72% to 78%) was quite remarkable. It resulted in an overall tenth position.

It was the unparalleled Jessica von Bredow-Werndl that secured the first world cup on home soil for Germany. Together with TSF Dalera BB (s.Easy Game) she received 90.8% for the Freestyle to Music. A score no one else could come close to. Catherine Dufour ranked second with the Westphalian gelding Vamos Amigos, an offspring of the KWPN bred and recognized Vitalis that was also bred out of a KWPN damline. Isabell Werth’s Weihegold OLD (s.Blue Hors Don Schufro) is saying her farewell this weekend and the magnificent pair concluded their career with bronze.

The World Cup Finals can be watched via ClipMyHorse/FEI.tv