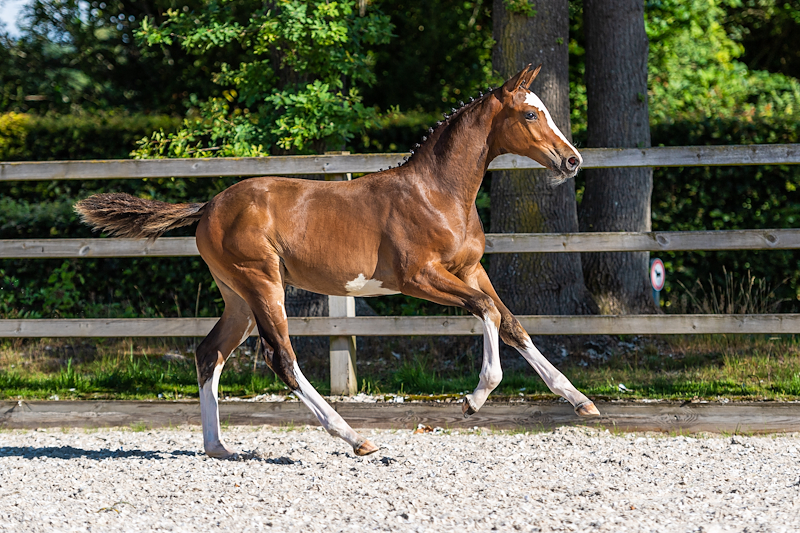 Generating 16.000 euros, it was Solinn that emerged as the top seller of the KWPN Exclusive Jumping Foal Auction 2022. A striking filly in terms of looks, but also her pedigree catches the eye. A new customer from Switzerland placed the winning bid and acquired something special.

The three most expensive foals will cross the border when they are old enough to be weaned. The athletic Sundorado TN (Eldorado van de Zeshoek x Fuego du Prelet) leaves for Italy for 11.000 euros. He is a half-brother of multiple successful international showjumpers, including Esteban (1.60m GP with Heiner Ortmann), the 1.45m/1.50m showjumpers Cara Victoria (of Romy Morssinkhof) and Dexter X (of Daniel Mosely). Full brother Ibis TN is active at 1.45m level with Alexis Borrin.

A French online bidder bought Stand Up (Conthargos x Verdi TN) for 11.000 euros. His half-sister Naminka was auctioned for 160.000 euros at Fences last year. They are both bred out of the full sister of 1.60m Grand Prix horse Gaucho (of Oliver Bischop).

The quality colt Shaquille (Cornet Obolensky x Concept) leaves to Latvia for 10.000 euros. He is another interesting stallion prospect as his dam already foaled two 1.40m jumpers plus she is a half-sister of RPM Canturado (1.55m GP). The granddam is a full sister of one 1.60m Grand Prix horse and two 1.50m showjumpers.

The KWPN calendar shows five more online foal auctions for this year. The next collection is launched on Monday the 5th of September. Bidding on this fourth KWPN Online Foal Auction is possible from the 9th till the 12th of September. More information can be found at www.kwpn.auction.