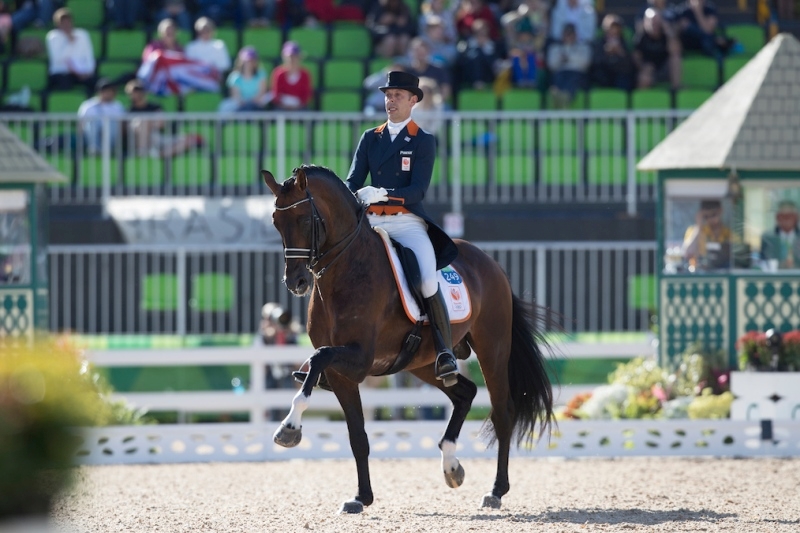 GLOCK’s Johnson TN grabbed the lead in the 2022 WBFSH Sire Ranking. In 2020, the KWPN stallion also topped the ranking and last year he slotted in second place. Kannan is the highest ranked KWPN jumper stallion, taking the fourth rung. Kannan is also the leading KWPN sire in the eventer discipline, claiming the ninth position.

The WBFSH rankings were computed over the period from October 1, 2021, through September 30, 2022. The international sport horses were awarded points for their performance. The Sire Rankings are estimated based on the offspring of the stallions.

The KWPN stallion Johnson (Jazz out of Roxane elite pref prest sport-dres D-OC by Flemmingh, breeder P. van der Vleuten of Sint-Oedenrode) heads the rankings for the second time. The stallion earned his stripes in sport through a long-standing career in the international Grand Prix with Hans Peter Minderhoud and his offspring also make a name for themselves in the dressage ring. Edison (out of Mutile keur prest by Balzflug, breeder F. Swanenberg of Nuland) is 34th in the individual ranking, making the largest contribution to Johnson’s number one position. The KWPN-recognized stallion Hexagon’s Double Dutch (out of Ushimanda keur prest by Rubiquil, breeder L. van Lieren of Schiedam) and Boston STH (out of Volmie ster by Quattro, breeder J.W. Temmink of Vorden) are the second and third Johnson-song in the individual ranking.

The legendary stallions Totilas (Gribaldi out of Lominka elite pref prest PROK by Glendale, breeder J.K. Schuil and A. Visser of Broeksterwoude) and Jazz (Cocktail out of Charmante keur prest by Ulster, breeder H. van Helvoirt of Rosmalen) are placed outside the top-3 this year. Totilas is in rank four and Jazz in rank five.

The KWPN-recognized stallion Kannan (Voltaire out of Cemeta keur pref prest by Nimmerdor, breeder M.G. Kramer vd Meer of Oud-Beijerland) takes the fourth place in the Sire Ranking for jumper stallion, which makes him the highest placed KWPN stallion. James Kann Cruz and Nikolaj de Music (ds.Nabab de Reve) made the most significant contribution to this achievement. Kannan is also the best KWPN sire in the Eventing Ranking as he secured the 9th rank. Carouzo Bois Marotin (ds.Flipper D’Elle) and Cooley Snapchat (ds.Arkansas) were the best Kannan-offspring in the individual ranking.

The ten best sires listed in the Sire Ranking for the jumper horses include three foreign bred stallions that are in active on Dutch soil: the recognized Cardento, the recognized Eldorado vd Zeshoek and the preferent stallion Zirocco Blue VDL, who ranked seventh, eighth and ninth, respectively.

The fourth and fifth positions in the Sire Ranking for eventer horses are taken by the recognized stallion Jaguar Mail and Contendro I. Their offspring also drew attention in the eventer sport this year. Besides Kannan, we furthermore encounter the KWPN-bred Arkansas VDL among the ten best sires. Arkansas VDL (Acobat II out of Aziemieka stb pref prest by Silvano, breeder VDL Stud of Bears) produced multiple remarkable eventing horses, such as Off the Record (ds.Ard Ohio), that placed fifth in the individual ranking and SRS Kan Do (ds.Touchdown).