Nominees Horse of the Year 2022 announced. Vote for your favourite! 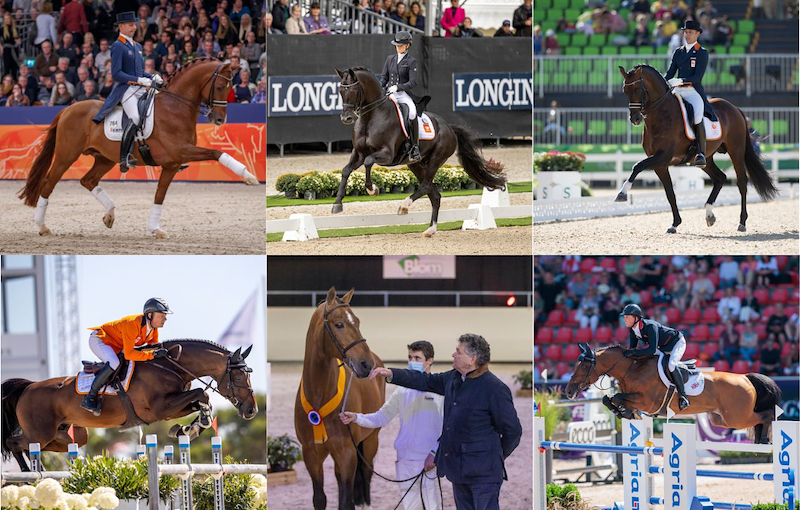 The voting for the title KWPN Horse of the Year 2022 is now open! Which jumper and dressage horse deserves the title in your eyes? You can cast your vote on your favorite horse once. Voting is possible until the 31st of December 2022. After the votes are counted we will know which horses will be awarded this coveted title. The winners are honoured during the KWPN Stallion Show in Den Bosch 1-4 February. If you cast your vote you have a chance of winning the book ‘The KWPN horse: selection for performance’.

The nominated horses for the title ‘Horse of the Year 2022’ are:

At the WC for Young Dressage Horses Kjento was once again sensational. Kjento is a son of Negro (former Stallion of the Year himself) and the preferent stallion seems to have passed on his talent. Kjento made a lasting impression in the performance test after which he was approved with 90 points and later turned heads in the stallion competition. Ridden by Charlotte Fry, the regal Kjento secured the gold at the world championships in Ermelo twice as he is only at the start of his career.

Bred by A. Versantvoort of Sint-Oedenrode

The preferent Vivaldi is a phenomenon in global dressage breeding. The stallion bred by Antoon Versantvoort of Sint-Oedenrode send the crowd at the KWPN Stallion Show into ecstasy for many years, his spectacular trot secured him multiple VHO Trophies. The Krack C-offspring produced eleven approved stallions at the KWPN alone, worldwide he sires dozens of approved stallions and his influence reaches all parts of the globe. His offspring distinguish themselves with their front, front leg, appearance, and pleasant character. The blood of Vivaldi is therefore often found in numerous sport horses from young horse competitions to the Grand Prix level. This year, Vivaldi placed tenth on the WBFSH Sire Ranking.

The preferent stallion GLOCK’s Johnson TN may rightfully call himself a Grand Prix producer as he sires over 50 Grand Prix horses. Bred by Piet van de Vleuten of Sint-Oedenrode he was elected champion of the KWPN Stallion Show and he produced five KWPN-approved stallions, including the keur stallion Bretton Woods. For years, the stallion was a tower of strength to the Dutch team, Johnson won team gold and individual bronze at the EC of Aachen in 2015 and made a crucial contribution to Dutch team bronze at the WC of Normandy. The Jazz-offspring produced many international sport horses, including Hartsuijker (ds.Scandic), Boston STH (ds.Quattro) and the KWPN-recognized Double Dutch (ds.Rubiquil). Johnson topped this year’s WBFSH Sire Ranking for the second time. Edison (ds.Balzflug) holds a 34th place in the individual ranking and thus made the largest contribution to Johnson’s leading position. The KWPN-rezognized stallion Hexagon’s Double Dutch (ds.Rubiquil) and Boston STH (ds.Quattro) are the second and third Johnson-son that made the individual rankings.

Bred by H.A. Brinkman and M. Huisman of Dalfsen

Faltic HB is incredibly successful at the highest level with Ben Maher. His individual second position contributed many points towards the KWPN’s result in the WBFSH Studbook Ranking. Together with his rider, the Baltic VDL-son obtained team bronze and an individual fourth place at the WC of Herning this summer, besides grabbing multiple top-three placings in various Grands Prix, including the runner-up position in the GCT of Rome and the third prize in the GCT of Cannes. Faltic HB thereby secured his rider the win in the Global Champions Tour 2022. The pair is currently ranked third in the FEI Combination in Jumping Ranking.

Bred by H. van de Wijngaart of Prinsenbeek and J.A. Schipper of Breda

The KWPN stallion Bustique was granted the keur predicate earlier this year at the KWPN Stallion Show and was active at international 1.45m/1.50m level with Michel Hendrix. In 2019 the stallion was brought back to the Netherlands to continue his career in breeding. The son of Indoctro was ranked 30th in this year’s WBFSH Sire Ranking and one of his most acclaimed children is Maikel van der Vleuten’s top horse Beauville Z N.O.P that not only triumphed in multiple Grands Prix and World Cup classes but also wrote history by taking the individual bronze in the Olympic Games of Tokyo. Bustique is furthermore represented by many offspring that perform at 1.35m up till 1.60m level, including the 1.60m jumper Florida Balia NL (ds.Lux) of Mel Thijssen.

Bred by Dick Verhoeven and Marinus Rietberg of Holten

The KWPN stallion Grandorado TN N.O.P. is successful at the highest level under the saddle of Willem Greve. The duo cleared six courses in three nation cups this year. After three prestine performances in the nation cups of Rome, Rotterdam and Knokke, TeamNL cheq d’equipe Jos Lansink selected Greve and Grandorado for the WC in Herning this year. The eleven-year-old stallion started off the year strong as he placed third in the Rolex Grand Prix of the Dutch Masters-Indoor Brabant. The 2014 KWPN autumn Performance Test champion was signed by the Dutch Olympic Horse Foundation (N.O.P.). Grandorado sires the champion of the 2019 autumn performance test Le Quirky JR (ds.Canabis Z), that was approved with 88 points, including five 9s. This autumn another Grandorado-son was added to the KWPN stallion base. Mister SFN (ds.Haarlem) grabbed the top honours in the Blom Cup for five-year-olds in Valkenswaard this summer.

Have you picked your favourite? Cast your vote now and help the dressage or jumper horse to ‘Horse of the Year 2022’ title.