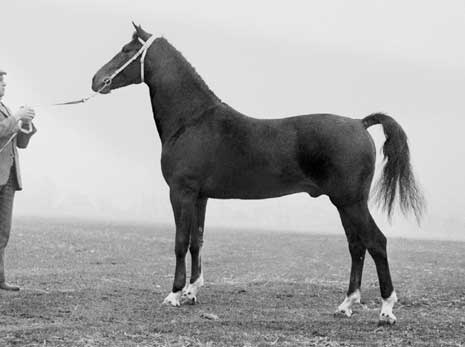 Offspring 1977 (complete collection)
This stallion was born in England and admitted to the KWPN breeding program. He showed an excellent collection of progeny. The foals had sufficient refinement, good height and desired uniformity. The stance of the foreleg was sometimes a little straight; the neck sometimes was a little poorly muscled. The pastern behind could bend a little more in the walk. The trot was correct, big, strong and the foals seemed to enjoy it. The yearlings and two-year olds also had good size. They showed a lot of class, which was expressed by a good coat and hard legs. The neck was better muscled and there was less tendency for a ewe-neck than among the foals. Movement was big, supple and had good balance. It is predicted that these breedings will be important to the KWPN tuigpaard breeding program.

Keur 1981
The hackney stallion Cambridge Cole, who was imported from England by his owner G. v Manen, was introduced to Dutch tuigpaard breeding in order to add hardness and nobility. By giving this 169 cm bay stallion the keur predicate the breeding committee made it known that he succeeded in doing so. As soon as the opportunity arose the jury made a selection from Cambridge Cole"s male offspring and sent them on to the performance test. The young stallions Raket and Respect were dismissed at the half-way exam but Royaal and especially Renovo made everything doubly right. Supreme with 183 points, Renovo (also called the Renewer) lead the 1978 crop to the championship with all nines and even a 9.5 for the show cart test. In the mean time the approval of Royaal, who did not do quite as good in the performance test, was not maintained after his foal crop was evaluated, while Renovo was able continue his renewal role. He must be seen as the link in the refinement process. The one time hackney cross could now go back to the original tuigpaard. In 1977, Cambridge Cole successfully passed his offspring inspection. His first foal crop had size, hardness and nobility and they showed a big, correct trot that was shown with pleasure. At that time the stallion committee voiced the expectation that there were several offspring that would probably enrich the tuigpaard breeding program and this was not an exaggeration. The status of the premiums quickly indicated that many offspring scored well on conformation. Including this year, Cambridge Cole bred a total of 391 mares, with a peak of 112 mares in 1978. Up until now 35 daughters have been accepted into the studbook. Of that number 14 mares have received the ster predicate, while 3 have attained their keur. Meanwhile - and this is also an important statistic - his offspring have appeared in competition. Besides Renovo, who won the UTV championship with a breathtaking performance, Stormy is also an excellent example. This crown jewel of Miggelenbrink had a very convincing win at the Levade while before that she was very impressive during the Twenthe breeding stock trade fair, an event in which Wilfried, a yearling by Cambridge Cole, also participated. There was also a Cambridge Cole that made an impression among the two-year olds. At the large competitions he is represented by Karel Hugo, Steven, Atleet and others like them that show that Cambridge Cole is also a producer of competition horses.

Preferent 1989
It is apparent that this Hackney stallion has had a positive influence on the tuigpaard breeding program. He has produced a series of approved sons, a large list of ster- and keur mares and his influence on sport is incomparable. On an internal test index for tuigpaard stallions he headed the list by a large margin.