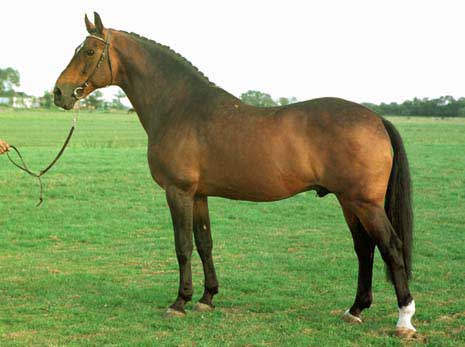 HK Utrecht 1975
26th of 36 riding horse stallions at the Utrecht stallion show.
The sire is a strong Holsteiner import. Hard damline with a chance for jumping talent. The total impression is still a bit immature, the type is good, movements are a little simple. The pedigree is interesting.

Performance Sleen 1975
He made little progress during the beginning of the test; he did do so later on. The resistance again increased during the last two weeks of the test, causing progress to be insufficient during this period. He has much talent for jumping, sufficient talent for dressage and cross-country. He is willing to work. His stall behavior is normal. Initially there was some resistance to jumping but he did have a good manner of jumping. He had some difficulty going to the left in free jumping. His behavior during the in-harness portion was normal.

< b>HK Zuidlaren 1976
4th of 5 riding horses; ID-premium.
Stallion with good body connections. The bone in the legs could yet be harder.

Offspring 1978 (complete collection)
The offspring were nicely groomed and braided, an exemplary keuring.
The foals are well developed with good breadth and depth, they also have good shoulder placement. The foals resulting from breedings to old-fashioned mares are not quite sufficient riding types. He does great by more refined mares. With them he passes on expressive heads. The walk is good, the foals have good freedom of the shoulder and a pushing hindquarter.
The yearlings are the same, the trot is noticeably forward and not upwards. The yearlings could have more scope in the walk.
The two-year olds are sufficiently developed, a few are a little plain. The walk and trot are as with the other groups. Most foals had hard legs.
Nimmerdor sires strong, sturdy horses, there were a few remarks on the hindlegs, but not enough to qualify them as insufficient.

Keur 1981
On 6/11/1972 the 168.0 cm, bay Nimmerdor was born at the farm of J.A. Dijkstra in Friesland. The stallion stayed true to the province of his birth except for a small trip to Marum in Groningen. Nimmerdor"s pedigree is also interesting because there was a plan. An old fashioned mare was bred to a Thoroughbred stallion and next another riding horse preserves size and mass. In this case Fiedhilde II was used, a 163.0 cm blue-gray mare that later received the preferent predicate. She came from Senator - Paladijn - Harro and therefore also carried the blood of the illustrious mare Morgenster, after which the bloodline goes back the Holstein. Mother Friedhilde comes from the hard stallion Ufried that stood in Drenthe. Friedhilde II earned her spurs in breeding and became - exempted from a performance test - preferent in 1978. She herself was known as a "somewhat loosly built horse with a not very strong back". She was brought to the Thoroughbred stallion Koridon xx, who at that time was one of the first transformers of the agricultural horse to the riding horse and who also produced several good sporthorses including The Saint with whom Jan Maathuis achieved victory. The mating produced Ramonaa who became a ster mare but she never settled again after Nimmerdor. This thoroughbred cross mare was brought to Farn, a reliable product of the classic Holsein F line. And thus Nimmerdor cam into the world. At the keuring he was still a somewhat "naked" stallion that gradually gained power and muscling. With excellent scores (primarily eights and nines) Nimmerdor passed the performance test. Nimmerdor left a good impressions as soon as his offspring keuring. He was an excellent fit, especially with the mares that carried blood. He produces strong, sturdy horses that generally walk and trot well. "Once in a while", so says the offspring report "a criticism must be made about the hindleg, without otherwise giving the insufficient qualification." Afterward Nimmerdor was also introduced to sport. He was noticed especially in Veendam last year in such a way that there was international interest in him. Later he performed very well under Gerrit Veeneman. In the meantime Nimmerdor enriched the breeding program with two sons, first Telstar that got 160.15 points during the performance test and thereby pretty much followed in the footsteps of his father, and this year Ulster that received 160.50 points. In the meantime Nimmerdor has bred 627 mares in the period from 1975 through 1981.
From his first few years of breeding 36 mares have in the meantime been accepted into the studbook. More than one third - 31 to be exact - have meanwhile received the ster predicate and 3 mares are keur, respectively provisional keur.

Preferent 1986
We can be relatively short when it comes to the stallion Nimmerdor. In In de Strengen no 7 of 1984 there was an extensive portrait of this stallion and his offspring. A few numbers to supplement. Through 1985 (the breeding figures of 1986 were not yet in when the issue went to press) Nimmerdor bred a total of 1,153 mares. A total of 664 foals were registered by him, 322 colts and 342 fillies. Of those fillies 153 were accepted into the studbook and nine geldings were branded. Only four mares were turned down, while so far 73 mares have received the ster predicate. A total of 46 mares are keur or provisional keur. So far 14 sons have been selected for the performance test. In service to the breeding program we find Telstar (USA), Ulster, Wellington, Wisconsin, Ahorn, Amethist, Aram and Bergerac.
On the basis of the breeding statistics, supplemented by the accomplishments of Nimmerdor offspring in sport, which include Olympic Up to Dat show recently won the Championship of Amsterdam, the stallion committee has decided to award the relatively rare preferent predicate, which is in principle reserved for the great ones in the breeding program.

1986
Again approved for a three-year term.