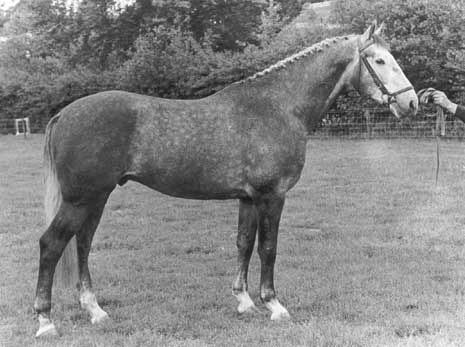 Performance Ermelo 1981
The stallion was in good condition upon arrival. He got harder and more riding type during the test. He is very friendly, steady and good humored. He is obedient and very honest. During the first part of the test he was easy going and should have been more aggressive. He got bolder during the last month. He has nice movement, a nice mouth and good carriage. The performance was very consistent. Strong, scopey, regular walk. The trot is more than sufficient in scope with good regularity and decent scope. The trot has good suspension. The canter is strong and well carried with a lot of scope and regularity. He is very relaxed in the canter. He jumps well, has good technique of the foreleg, a lot of scope, good bascule and good appraisal of the jump. He likes to jump crooked and does not always make a pretty jump. He works well in cross-country. He has a good and clever eye for the jumps. He pulls honestly and well. He enjoys the work. In the beginning he was moderately to sufficiently willing to work, later on he was very willing to work. The work is easy for him. He has very much talent for dressage and jumping, much talent for cross-country. He is very calm in the stall. He got more oats than normal.
He colicked on 3/13.

This stallion showed a collection of sufficiently developed foals, several of which were a little narrow. The young foals seemed to be mostly short-coupled, but the older foals showed that they had outgrown this. There was variation in type. The foals in the first group of the picked foals were more the riding type, while the second group of the picked foals were more breeding stock quality. A like difference was also noticed among the selected foals. The first group in this collection showed refinement and type, clearly more than the picked foals, but with the same type of difference as with the picked foals. The remarks about the heads varied, some foals had absolutely pretty heads but there were others with a somewhat coarse jaw and sometimes the head should have been finished more correctly. The rather high set neck is often poorly muscled and ewe-necked. The wither is good in length and sufficiently developed. The slope of the shoulder is generally good, but sometimes a little short and some foals could have more slope. The back is pretty good, sometimes a little long. The first group of picked foals should have stronger loins, but otherwise good, especially amongst the selected foals. The croup often appeared narrow and, in several cases, was also short otherwise it was good. The hamstring should be longer for most foals. The foreleg should be a little more developed, even though there were foals with a strongly developed forelegs. There was a straight foreleg as well as several that were tied in below the knee. Several foals were slightly toed out. The hindleg was mostly long and sickle hocked, this was especially true for the group of picked foals with otherwise well developed hocks. The selected foals usually had a good hindleg in regards to build and stance. The walk was normal, not much from the shoulder and with little suppleness from the hindquarter. The trot showed remarkable variation: the group of picked foals generally had good freedom of the shoulder but the hindquarter should come underneath more decisively; the group of selected foals came underneath well but had the tendency to have the foreleg under in front. On the grounds of the observations of the foals it appears that the stallion throws 100% gray.

He was first approved for a term of 3 years on the basis of:

a. the indication that the stallion will produce dressage horses (index of 153, high reliability of 70%);

b. the determined fact that a number of his offspring perform on a high level in dressage;

c. even though the stallion varies in what he produces, he can deliver mares that are in high regard nationally.

Uniform was awarded the keur predicated. Even though he assuredly has a positive influence on conformation, this decision was mainly based on the observation that he can be regarded as a sire of talented dressage horses. With a high reliability of 78%, he is in third place on the dressage index with a score of 171, behind Roemer and Sultan.

The preferent predicate has been brought forward several times in expectation of his offspring entering Grand Prix level in dressage. This especially pertains to the horses: Arizone, Barok, Hoflands, Baboon, Lovely Surprise, Montreaux, Metalic and Ceasar. Six offspring compete at Prix St. George level. The dressage index is at 131 points with a reliability of 88%. The requirements for preferent are not only concerned with performance. On that point Uniform, who performed decently as a young horse himself, is quite satisfactory. His conformation index could be better in several components. The fact that he has given three approved sons to the breeding program (Gregor, Highness and Junior-STV) also played a roll, while the percentage of ster- and keur mares is in good proportion.