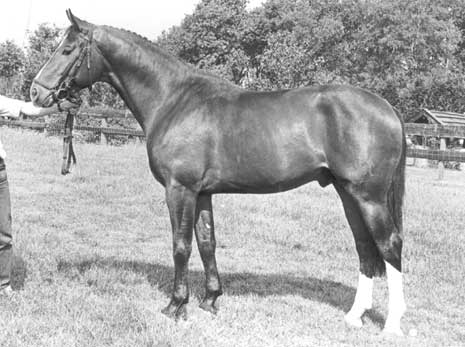 Friendly, attentive, good humor, obedient and honest. At the start of the test he gave the impression that he had been lunged a lot. The first few weeks he was really on the forehand and his poll and neck were stuck. During that time he also tilted his head a lot. He improved later on. Throughout the test it remained difficult for him to bend through a turn and sometimes it was not easy for him to give. He had to be ridden with a loose rein for a long time. The walk is regular but short. In the walk there was little suppleness and little bend in the hindleg. The bend in hindleg could also be improved upon in the trot. On and off he held himself through the back in the trot. The trot has sufficient regularity. The canter is relaxed and economical, moderate in scope but very regular. He is in his element while jumping. He has good technique under saddle, a great ability to jump and a good eye for the jump. He has a good jump in free jumping, the bascule should be better. He is very reliable in cross-country, the gallop has moderate scope. He has a short step in front of the sled, good pulling carriage. He is more than sufficiently willing to work and he finds the work easy. He has sufficient talent for dressage, very much talent for jumping and cross-country. He was in good condition upon arrival and remained that way. Stall behavior is calm.

On 3/22 he was lame in the right hindleg during the walk and trot, his right hip was lower than the left. He went to the University of Utrecht for testing. He was not lame during his examination. Later when he returned to Ermelo he was not lame either.

On the average this stallion showed well-developed offspring, a few lacked a bit in development. The foals could be built a little more riding type, however, the selected were in better type than the picked. Moreover, the foals have refinement and hardness. The head is well formed and expressive. The topline of the neck is always good, sometimes the neck is a little deep from the chest. The wither has sufficient length but has to grow longer; the selected foals were better. Especially the picked foals should have more slope in the shoulder, the selected foals did have more well-placed shoulders. The back/loin formation should be stronger. The croup is always well formed and well muscled. The foreleg has a well-developed knee. There were both toed-in and toed-out forelegs, and sometimes it is a little straight. The hock of the picked foals could be better. The foals could have more suppleness and scope in the walk and the hock could show more bend. The trot is good, with remarkably nice use of the foreleg because of a slight bend in the knee, without getting round. The trot has sufficient scope but the hindlegs should come underneath more convincingly, especially the picked foals. The foals like to present themselves.

Voltaire was awarded the keur predicate because he visibly passes on performance talent. The fact that he has five approved sons that have proven themselves in sport also contributed to this decision. With good reliability of 76% he already takes a 21st place in the index with 131 points even though he is still a relatively young stallion. That he is multi talented is shown by the fact that he has a reliability of 61% on the dressage index with 125 points. The stallion committee wanted to express the value of this stallion to the breeding program by eliminating the "first three-year approval term".

With a fourth place (129 points) on the jumping index and an extremely high reliability of 93% it has been determined how important this stallion is. Moreover he scores as high (129 points with 85% reliability) on the dressage index. He has already produced eight approved stallions. Of the 267 studbook mares, 122 are ster and 36 are keur. He strongly passes on conformation in regards to length and placement of the shoulder and croup.